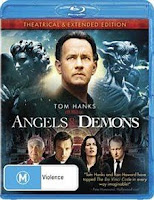 I think A&D was written before the DVC, so you shouldn't really call it a sequel.

And they didn't invent the 'god particle' stuff - it's a popular name for this particle (according to wiki), and probably disliked by most scientists.

1. The story of Angels and Demons takes place before Da Vinci, at least according to the book (the film is ambiguous on that point).
2. The fact other people utter bullshit does not give one justification to do the same, especially under the pretense of authenticity Dan Brown is so passionately trying to establish.