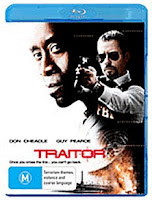 Lowdown: An FBI agent in battle with a Muslim American plotting a September 11 like attack.
Review:
Traitor is yet another film from the production line of American action thrillers dealing with Muslim terrorists and taking place between the USA and the Middle East, films such as Body of Lies and The Kingdom. Like them, it’s a thrilling affair; like them, it tries to be realistic but blunts things out in the name of selling movie tickets; and like them, it is an uninspiring mediocre affair that is far from shaking the foundations of your local cinema or home theater with excitement. No new ground have been broken with Traitor.
Traitor pits two major forces on opposing sides. On one side we have Don Cheadle playing a Muslim ex USA army hero who betrays his country and joins forces with an extremist group in Yemen. The group has some nice community terrorist activities in Europe but also has some grand designs for something truly spectacular in the USA. On the other side we have the rather undeveloped character of Guy Pearce, an FBI agent whose day job it is to stop the truly spectacular from taking place on American soil. The film follows the couple’s adventures and occasional professional rendezvous as the plot thickens and each side seems filled with traitors.
Other than thrilling its viewers, the main point behind Traitor is to show that there is more to Islam than terrorism by showing there is a face behind the terror and by showing there are Muslims with good intentions around. I guess that is where the film's name comes from: the question of who is the true traitor to the Muslim faith, the terrorist or the Muslim that fights to stop the terrorist.
This is all a fine and dandy discussion, only that on the way to nirvana the film sort of stabs itself in the back: in one scene, for example, our terrorists ponder how to shock the American public into submission by terrorizing them. Well, if you ask me, they don’t really need to do anything: the films Hollywood itself is churning out do a good enough job terrorizing Americans through their creation of fictitious ultra terrorists that blow stuff up all over the world while failing to remind the viewing public there’s not half as much terrorism going on in the real world around them.
Worst scene: Terrorists blow up a bus, turning it into a sexy ball of flame. For a film that’s designed to look realistic to one extent or another (do FBI buildings really look so space age metallic?) this is a bit of a shame: diesel fuel is not as combustible in real life as it is in the movies. That is one of the reasons why, for example, buses in Israel are running on diesel and not on LPG, a fuel that would turn an even mundane bomb into quite a horror. As it is, the result of a bomb going off on a bus should be torn metal and torn limbs, not an orange ball of fire. Which raises the question: where were the torn limbs in Traitor? Lost on the way to the rating panel?
Technical assessment: A pretty average Blu-ray with a good picture overall but some color inconsistencies and a soundtrack that is more restrained than what normally takes place in this genre.
Overall: Entertaining yet entirely forgettable. 3 out of 5 stars.
Posted by Moshe Reuveni at 9/01/2009 10:03:00 pm
Email ThisBlogThis!Share to TwitterShare to FacebookShare to Pinterest
Labels: Film