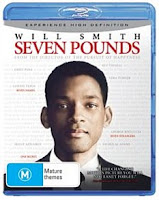 Lowdown: A guy dedicates himself to helping seven strangers.
Review:
Once upon a time there used to be an actor called Will Smith. Smith played in some very entertaining films, such as Independence Day or Men in Black. Lately, though, Smith seems to be channelling his career towards what, for a multitude of reasons, can be best described as just plain “bad”: stuff like I Am Legend or The Pursuit of Happyness. Sadly, Seven Pounds follows the lines of the latter rather than the former.
In Seven Pounds, Smith plays an IRS auditor who deals under mysterious circumstances and using mysterious ways with the cases of several Americans that happen to suffer from various problems: a cruel and violent husband, blindness (Woody Harrelson), and a heart that is about to fail at any minute and kill its owner (Rosario Dawson). In the process, and in typical Hollywood manner, Smith and Dawson fall in love.
Yet there is something going on in the background. We know that through the occasional brief flashback, through the unexplained tension between Smith and his brother, and through clues there is more to Smith than meets the eye (how can an MIT, the MIT, graduate end up with a lowly IRS job?). And what is Smith's motivation to help these people in the first place?
It is this mystery of “what the hell are the premises of this film” that supplies the tension to Seven Pounds, but it is also its ruin. The structure of the film is very similar to the by now standard M. Night Shyamalan production: seemingly unrelated, weird and mysterious events all cooperating to some elusive but major surprise twist at the end. Seven Pounds even shares its rather melancholy atmosphere with Shyamalan. Yet, after the initial charm of Sixth Sense has faded off, and it did, is there really any reason to copy Shyamalan? Not in my book; I’ve had enough of him.
Then there’s the question of whether Seven Pounds does the Shymalan formula any favors. In my view, it doesn’t: while it attempts to create a build-up for almost two hours, I was able to guess the ending some half an hour into the film. If anything, I was surprised at how accurate my initial guess came out to be.
So there you have it. Seven Pounds is a sad and confused affair that is too long for its own good, does not say much that hasn’t been said before, and is overall predictable. The only mystery about it is why it was made in the first place.
Worst scene: The montage in which Smith, being the MIT graduate he is, takes his DIY tools with him to fix Dawson’s Gutenberg era printing machine. It’s always so easy in the movies. So unconvincingly easy.
Technical assessment: Typical Blu-ray quality picture but a rather subdued sound that matches the feel of the film. Things do pump up at the climax, at least.
Overall: I think I can safely say Will Smith has ran out of credit. 1.5 out of 5 stars.
Posted by Moshe Reuveni at 9/18/2009 11:56:00 pm
Email ThisBlogThis!Share to TwitterShare to FacebookShare to Pinterest
Labels: Film