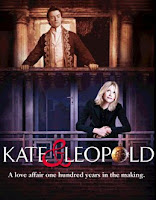 Lowdown: A 19th century aristocrat and a 21st century career woman fall in love.
Review:
The question I was asking myself after watching Kate & Leopold was simple: why does an actor as talented as Hugh Jackman choose to appear in films that tend to offend one’s intelligence?
With that in mind, let’s skip to the plot overview of this 2001 release. Kate & Leopold starts with a rebellious British aristocrat, called – hold your breath! – Leopold (Jackman) who is visiting New York on 1876. His mind is on science and invention, yet his family is pressuring him to fulfil the duties his position in society requires him to. Our Leopold is tough, but is he tough enough to stick up to his ideals?
Opportunity to stand up to them presents itself when Leopold follows a mysterious visitor through a crack in time and into the guy's modern New York apartment, just on top of the apartment where a successful advertising career woman (Kate, played by Meg Ryan) lives. From this point onwards the stage is set for an unlikely romance to take place between the two. Unlikely? Well, actually it's as likely as the sun showing up tomorrow morning given the film’s own marketing, but you have to admit the setup does provide the film a lot of material to play with: Leopold’s ideals vs. Kate coming from the world of advertising where the twisted truth is reality, and of course the fact there’s more than a hundred years between them. Which, in natural fashion, opens a very wide door for an assortment of jokes dealing with the way a person out of our world would come into grips with our world.
It’s all very nice and charming, in that “sit by the fire and relax in front of an easy film” sense: it’s a rather funny affair with two good actors in the lead. Jackman proves he is a force to be reckoned with, and Ryan – well, she’s doing the typical Meg Ryan thing. Only that this time her age shows: perhaps it’s the high definition speaking here, but on close-ups Ryan really betrays her age. Don’t get me wrong, there’s nothing wrong with that – it’s about time Hollywood stops pumping us with talentless bimbos that look like they came out of Photoshop. It’s just that I did not expect her age to show up so clearly given my experience with Hollywood’s make believe habits.
Despite all the good things about it and despite the promising premises for a romantic flick, there is something awfully wrong with Kate & Leopold. That something is to do with the way the film romanticizes the past: In a manner that seems to come directly from some conservative party’s propaganda, Leopold is portrayed to come from a past where a man was a man and where ethics were on everyone’s mind. Compare that to Ryan’s work environment, with the lying her work requires, kissing up at the office, and abuse from her boss, and you could think that our world has gone down a lot since 1876. I therefore consider it my duty to remind viewers things weren’t as great in 1876 as Kate & Leopold might lead you to believe: They didn't have antibiotics back then, for a start. Then there's the fact Kate herself would be a second rate citizen given she is, after all, a woman. Well, at least she’s not a black woman…
Worst scenes: The film’s first act features sporadic references to Meg Ryan’s lost Palm Pilot. I agree those Palms used to be great products, but the repetitive nature in which they are referenced does age the film (let’s face it, as good as they were, products based on the Palm operating system have died long ago). The references also beg the question of just how far product placement should be allowed to go, both for artistic and for moral reasons: the crowd paying to watch Kate & Leopold did not pay to watch an ad.
Overall: Entertaining on one side but looks to the past through a viewing glass that's been tainted pink to a significant excess. I’ll be harsh and grant it 2.5 out of 5 stars.
Posted by Moshe Reuveni at 9/04/2009 11:42:00 pm
Email ThisBlogThis!Share to TwitterShare to FacebookShare to Pinterest
Labels: Film