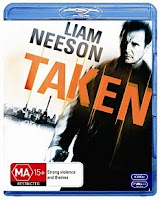 Lowdown: A contemporary styled Death Wish.
Review:
Taken, a 2008 French production, seems to be a different take on The Transporter’s formula of Euro style high octane action with an appeal to the English speaking world so that the film could make money in America. The main difference between the two, it seems, is in Taken taking itself seriously. Can an exaggerated action film manage to pull its tricks when done with serious pretensions?
The way Taken chose to deal with the challenge is by playing with its viewers emotions. The story starts in California, where we learn of a loving father (Liam Neeson) separated from his teenage daughter through a divorce. He will, however, do everything it takes for her; which makes her a pretty lucky daughter when she’s kidnapped while visiting Paris with a teenage friend of hers. Lucky, because Neeson turns out to be an ex CIA war machine that eats Rambo for breakfast.
Using his James Bond like skills, Neeson tracks down the kidnappers and starts waging his personal war to retrieve his daughter before she’s sold off as a sex slave. One by one he hunts down baddies and kills them in various ingenious ways.
Overall, Taken is very much a repeat of the tried and tested Death Wish. The fights are predictable in the sense that you get the boss fight just before the end (just like real life, isn't it?) and the mandatory "escape from capture" scene is way too similar to Lethal Weapon's. Yet it’s all high pumping action oriented, and indeed the action is quite spectacular; if you liked The Transporter you will feel right at home with Taken. Even when the camera is moving erratically, as it does from time to time, things feel natural. So yes, taken at face value, Taken is a very entertaining film. Which does not mean it’s flawless.
As I have already said, Taken attempts its way by playing with emotions. On one hand, we have the fatherly feelings driving the Neeson figure; understandable. On the other, though, we have significant xenophobia: Americans are not to trust Europeans, and Western Europeans are not to trust Muslims and Eastern Europeans. It’s all so very extreme and so finely targeted it made me want to puke: to the more ignorant viewer, Taken may well create a very distorted image of reality. On the positive side, it does portray government as corrupt to the core, which does resemble reality (at least the Australian version of it). The unavoidable conclusion, though, is that Taken is an insult to the intelligence of a thinking person and dangerous contamination to the rest. Political movements have been outlawed for lesser offenses.
Personally, I found Neeson to be a rather interesting choice for the main character. Interesting, but not necessarily good: On one hand, I appreciate his qualities as an actor; as Kinsey proves, he is way too good for what Taken requires. On the other hand, I have to add he never really managed to capture my heart as an action hero, not in Rob Roy nor in the dreaded The Phantom Menace. That same dilemma continued with Taken: to one extent or another, Neeson feels out of place.
One thing that amused me about Taken is the repeated theme of a divorced father having to fight his way to the heart of his estranged son/daughter. It’s a theme that dominates not only Taken, but also the previous three films reviewed by this blog: Last Chance Harvey, Life or Something Like It, and Night at the Museum. And what do I take from this repetition? That the world of cinema is finally coming to grips with reality. The core family concept of a married Mr and Mrs with two children and a dog that dominated American cinema from way back is finally breaking apart.
Best scene: In order to inform us that Neeson is an ex killing machine at the start of the film, the film chooses to have him meet with friends who tell us that fact verbally. I just thought it’s a nice way of doing things, being that I am as sick as I am with the overuse of flashbacks. Some times simplicity is the way to go.
Technical assessment: Picture quality varies, with some scenes colored way out of whack. The sound is good and aggressive as due for an action film, but not of the topmost fidelity.
Overall: Pumping action that misses out by being too serious for its own good. 3 out of 5 stars.
Posted by Moshe Reuveni at 8/20/2009 11:13:00 pm
Email ThisBlogThis!Share to TwitterShare to FacebookShare to Pinterest
Labels: Film

This film was so unnecessary.....it felt like the skeleton of a film. It didn't do anything that the Transporter series, Kiss of the Dragon, District B-13, etc didn't do better.

I obviously didn't not like Taken as much as you, but I agree: it does feel like a film where the filmmakers themselves did not believe in the outcome. It's evident in the supplementals, too, where the producers go out of their way to explain Neeson's casting, as if it needed explaining in the first place.