The Robots of Dawn by Isaac Asimov 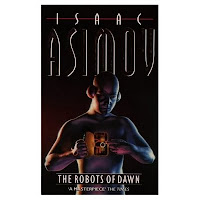 Lowdown: An earth detective is sent to investigate the murder of a robot in an outer space world.
Review:
For almost three decades now, Isaac Asimov has been one of my favorite authors. He was very prolific and wrote hundreds of books, some of which have established quite a reputation - such as his Foundation series. However, my Asimov favorites have always been his robot stories: From I, Robot to the teen oriented Lucky Star books, I was and still am a sucker for the ideas in Asimov's robot stories. Even more so now, I guess, since having read books dealing with the human mind and artificial intelligence (books such as Steven Pinker's How the Mind Works and Daniel Dennett's Darwin's Dangerous Idea). Of Asimov's robot books, my favorite had always been The Naked Sun, which happens to be my second ever science fiction book read and one of my top three nominations for best fiction ever. The Robots of Dawn, reviewed here, is The Naked Sun's sequel (which is itself a sequel to The Caves of Steel).
My point with all of the above exposition is simple: While Robots of Dawn has a significant weight of expectations to bear upon its 500 or so pages, one cannot expect an objective review out of me; when it comes to Elijah Baley, the hero of this series of books, I am quite emotional.
So what is Elijah up to this time around? Robots of Dawn has him called to the chief outer space world, Aurora, in order to investigate a murder case that puts the future of earth entire on the line through some sophisticated case of interstellar policies. The catch? As an earthman, he's not really welcomed on Aurora, has no authority, and has not much time to set things right. Oh, and there's another catch: the murder victim is a robot.
Thus starts the story of a murder mystery that does not reveal itself until the very last page of this very thrilling read. Sex, political intrigue and industrial espionage are all involved, making me think several times along the way that I have already figured things out; yet I was always proven wrong despite the evidence being there in front of me all along.
There is, however, much more to Robots of Dawn then a murder mystery: in classic Asimov style, we learn about the workings of planet Aurora to great detail, thus earning us an alternative view of our own society and culture. Robots of Dawn is proper science fiction by the book, with its entirely credible science (the only possible exception being the ability to hyperspace) and entirely credible societies to match. Thus Asimov is able to provide us an alternative glimpse at our own society with a good opportunity for us to look ourselves in the mirror. And naturally, the robot characters end up being more human than humans, perhaps stealing the show.
Interestingly enough for Asimov readers who read his books in the order they were first published, The Robots of Dawn represents an attempt by Asimov to link his Robots world with his Foundation world. The attempt is interesting, in a soap opera type of a way, but overall it doesn't subtract nor enhance the book; it's just there, providing Asimov the infrastructure for more sequels.
Carl Sagan said he recommends anything written by Isaac Asimov. I concur, but I would like to add a special recommendation to The Robots of Dawn. Granted, it's not as good as The Naked Sun; but then again very few books are. The Robots of Dawn is still a great book never the less.
Overall: I heart Asimov. 5 out of 5 stars.
Posted by Moshe Reuveni at 8/29/2009 10:14:00 pm
Email ThisBlogThis!Share to TwitterShare to FacebookShare to Pinterest
Labels: Book

Sounds great. I'll be sure to read it.

On a more serious note, it's very difficult to do sequels right. Especially when it's been a while since the last part (about 30 years, in this case).

SF books in the 80s (and now) were much longer on the average than those in the 50s.

And Asimov himself has changed in that time, writing less and less fiction.

On top of all that, I read the next book Robots and Empire before this one, so I already knew important pieces of the plot.

So it's rather suprising that I like this book so much. I asked my Dad to get it for me on one of his trips, and then I found out that Tal had it, so I borrowed it from him, and finished it before my own copy arrived.

Well, as you and your buddy Carl say, Asimov is really good.

I agree, friend Uri: I was surprised by how good I found this book to be and by how much I've enjoyed it.

After a break of about 10 years, I recently started reading Asimov again. I'm reading "Robot Dreams" - a collection of short stories. I am still amazed at how much modern technology Asimov predicted.