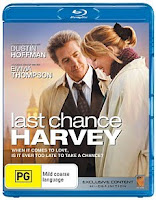 Lowdown: Two complete strangers could potentially be each other’s ticket to happiness.
Review:
Some two years ago I got to watch a film featuring both Dustin Hoffman and Emma Thompson called Stranger than Fiction. I really liked it. Now I got a similar opportunity on my hands with Last Chance Harvey, a film where the above are the main stars.
Dustin Hoffman is Harvey Shine, an old American musician making his money out of commercials. He travels from his home to London to take part in the marriage of his daughter: she’s marrying another American but she does it in London. We learn his employer doesn’t really want him back from this trip and we quickly learn his daughter doesn’t really want him either: she is much happier with the step dad who married her divorced mother. So much so that she prefers the step dad to hand her over and has no problems with Hoffman disappearing before her wedding reception to deal with his waning career.
In parallel we learn about Emma Thompson, a single woman despite her age (the real life Thompson is 50 years old). Still very much attached to her mother, or rather having her mother attaching herself to her, she craves a relationship but has problems acquiring it despite attempts from her fellow workers at Heathrow airport.
It is at the airport that Hoffman and Thompson meet. It takes them a while, but eventually they start to open up to one another, telling one another secrets they haven’t told anyone else. Hoffman, for example, admits that his life long dream had been becoming a jazz pianist, but when asked again he also admits he’s just not good enough. Not many people I know can make such a statement, and the result hits home: by opening up to one another the two become closer. The question is, can this relationship, our heroes’ last chance, work? After all, they come from different countries, different backgrounds, and there’s a significant age gap between them. They’re even the wrong way around, height wise!
The point is made stronger with a side story that copies the same theme from the main one: Thompson's mother is suspicious of her new neighbor, a Polish guy that seems more like a murderer given his dubious backyard activities. Or is he so?
Overall, Last Chance Harvey is a very charming film. It’s charming because it’s an optimistic call for people to open up to one another, demonstrating just how much can be achieved by being open and transparent. It made me want to go out and call on the world’s population to write their own personal blogs so they could potentially engage the whole world with theirs. True, exposure can lead to abuse, but I tend to think the positives significantly overpower the negatives. I also apply the same thought at the country level: for example, when making my mind up on whether I want to see immigrants from various backgrounds in my neighborhood; but that gets me out of the film’s scope. The point is to open up and make a genuine attempt to get close to one another.
On their part, Thompson and Hoffman are both terrific actors that help drive Last Chance Harvey home all the way. Hoffman has always been a favorite of mine, and indeed in here his performance is at its peak: he truly captivated me from start to finish. I just love the guy.
Last, but not least, is the city of London. London serves as the background for most of Last Chance Harvey, and unlike other films where it is portrayed as a business center or the larger James Bond headquarters, here London is portrayed as a nice, cozy and charming place. Last Chance Harvey definitely reminded me why London is one of my favorite places to visit, even if I don’t think of it in terms of a particularly romantic place; it’s enough that it can be such a place if one wants it to, and it definitely been so for me.
Best scene: There are many to choose from, but I find the most memorable one being Hoffman’s wedding reception speech. It’s his second wedding related speech; the first was a disaster, and you just cringe as he forces his way into a second one.
Technical assessment: The picture on this Blu-ray is reference quality. Great colors and amazing level of detail allow you to pick out on Hoffman’s individual hairs. The sound, while the complete opposite of aggressiveness, is well done and supports the film’s atmosphere very well. A great effort.
Overall: What a lovely experience Last Chance Harvey is! 4.5 out of 5 stars.
Posted by Moshe Reuveni at 8/06/2009 11:06:00 pm
Email ThisBlogThis!Share to TwitterShare to FacebookShare to Pinterest
Labels: Film

I just rented this yesterday! I'll check back in after I see it.

And the verdict is?

It was very good!
I had a difficult time with the swift change-over of Hoffman's "This is the crappiest day of my life" to "Hey, she's cute." But other than that, very enjoyable. I love Emma Thompson.

You are right, but think how hard it was for Hoffman: realizing that he won't be getting much of a chance at life anymore, and grasping the opportunity presented to him.
I really loved this movie.