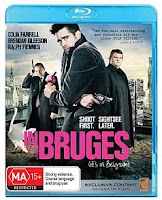 Lowdown: Two hitmen stuck in Bruges, Belgium.
Review:
Our local video store had filed In Bruges under comedy. A look at the Blu-ray's front cover tells you that it's a film about hitmen doing their job, which doesn't ring like comedy to me, but the back cover supports the notion it's a comedy. What is one to make of In Bruges? I was curious enough to know, with my curiosity aided by the film's cast.
In Bruges tells the story of a few days in the lives of Colin Farrell and Brendan Gleeson, two Irish hitmen who had just finished a job in London and were ordered by their boss (Ralph Fiennes) to go the Belgium city of Bruges and lay low. The pair has two very opposite approaches to this opportunity that befell them: While Gleeson goes out of his way to make the most of sightseeing in Bruges, Farell sees it as a hole in the ass end of the universe and can't wait to get back to real life. This friction leads to a lot of dialog filled with four letter words and semi comedic situations not unlike stuff out of Pulp Fiction (and again, I'm not particularly original with this analogy; the back cover goes a long way into making you think In Bruges is a Tarantino sequel).
Then, at some point towards the middle of the film, we have ourselves a bit of a flashback moment where we learn what really happened in our heroes' last job, back in London. This sets events in a different light, and certain things are to take place; the film picks up pace and becomes more of a thriller than a blunt edged comedy.
Overall, In Bruges feels like a film that was great fun for all those working in it to make. It is, however, not a particularly good film: you won't suffer as you watch it, but you won't go "wow!" either. If you like the Pulp Fiction type of a dialog you'll have a good time here, but that's pretty much it. Other than that, the only thing that really makes In Bruges stand out is it being located entirely in the city of Bruges, a place not on the average tourist's map (and probably for the wrong reasons).
Best scene: A chase scene where one man hunts another towards the end is very well made. It's set up in night time Bruges, with all of its historical monuments; it's well shot and edited; and the music soundtrack turns into a mix of electric guitars and drums coupled with powerful classical music to make the scene truly exciting. Add the good acting talent involved with the film and you have yourself a powerful scene.
Technical assessment: In one word, I would say this is an average Blu-ray when it comes to picture and sound. Probably a bit worse than average in the picture department.
However, the main issue with this Blu-ray is its lack of subtitles. For a film featuring two Irish leads who go out of their way to make the most of their Irish accents in the film, this is inexcusable. I found myself focusing so much attention on what's being said I missed out on crucial things; I also missed out on a lot of the dialog, just because it was so incomprehensible.
Overall: Unique, but neither here nor there. 2.5 out of 5 stars.
Posted by Moshe Reuveni at 8/28/2009 11:28:00 pm
Email ThisBlogThis!Share to TwitterShare to FacebookShare to Pinterest
Labels: Film