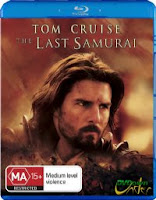 I LOVE this movie. Agreed, it over-simplifies and glosses over many things in regards to life and culture, but there are things to learn as well. I thought this was one of the better roles for Cruise, and the battle & fight scenes were pretty darn good.

I think the scene that affected me most was in the last battle when they bring out the Gatling Gun. The rest of the film was very dramatic and romanticized. This moment just becomes very stark and sobering, momentarily letting go of the sweeping soundtrack and just taking a full picture of the gun's effect.

We seem to be in general agreement about Last Samurai, but I have a problem with that machine gun scene. It's the problem I have with the entire film: the scene symbolizes all the bad that came to Japan with exposure to the West. As I have said, there is a lot of bad indeed; but let's also not ignore the fact today's Japanese (and the general majority of the rest of us) have never had it better, and it's all because of the same technological progress that got us machine guns.
So instead of this romantic / conservative / black & white look at things, I would prefer something that highlights the complexity of it all.
But yeah, it is a key scene. A key scene in a very entertaining but very compromised film (which I still greatly enjoyed).

So, you very clearly have an aversion to (or at least, a problem with) stories that come across as one-sided. But really, can you expect every film to portray everyone's perspective?

You're right; life is too complicated to be portrayed in binary terms. However, as you suggest, I can't expect everything to show shades of gray, and I don't expect that out of The Last Samurai either; me rating it as highly as I did is evidence that despite its problems I still liked the film (a lot). It's a very entertaining epic to watch, which goes a long way.