The Curious Case Of Benjamin Button 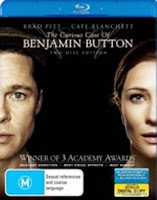 Lowdown: The world's interaction with a guy that was born old and grows younger every day.
Review:
To me, watching The Curious Case of Benjamin Button (or just Benjamin Button for short) has had a motif or "returns". It's a return of Kate Blanchett and Brad Pitt working together as a couple after Babel; more importantly, it's a return of David Fincher, one of those directors I look up to ever since Se7en, even if his follow up work was not in the same league.
Like previous Fincher films, this one is also on the eccentric side of things. On the day in which World War 1 had ended a guy had installed a clock that runs backwards at an American train station, in the hope it would bring back the son he lost at the war. That same day Benjamin Button got born, but "obviously" - given the clock running backwards - his life his running backwards, too. That is, he was born old and he's growing younger by the minute.
I knew thus far from hearing about the film, which left me curious: does being born old mean the guy was born at adult size? The answer is no, although later in this film that follows his life from start to finish he does grow smaller as he becomes a child. My point? The story's premises only goes as far as it is comfortable for Fincher to go ahead with it. Now let's get back to the plot.
Benjamin Button's mother dies at birth and his father abandons him, given his old looks. Button is adopted by a black woman running an old people's home; she raises him as her own child. He fits there anyway, being that he's old and all. Eventually he meets a girl visiting a relative of hers; with time he grows to be Brad Pitt and she grows to be Kate Blanchett, and as you can guess their lives intersect but them coming at it from different directions offers a challenge.
The thing about Benjamin Button the film is that it's full of symbolism. The story is told by an old Blanchett that is about to die of old age at a New Orleans hospital just as hurricane Katrina is about to hit, and it's told through Julia Ormond (her daughter) reading Button's diary. Between Katrina, the flashbacks, the basic premises of the film, and the various side plots + characters + flashbacks it becomes plenty obvious one can read a lot out of the film. Clearly, a center motif is that we navigate through life under the effect of seemingly minor events; crossing the road a second later than when we did would have led us to live a completely different life. The thing is, with Benjamin Button so heavily loaded with two and a half hours of symbolism, one can read any agenda one likes to read in the film. To me, it all felt like one big wank.
A wank, however, is not necessarily all bad. The story can be interesting, even if it's on the weird side of things. It can be enjoyable, too, despite its slowness. It is often touching and it is not without elements I could identify with, such as Pitt going to see the world and learning what life is about. The biggest thing about the film, though, is its production values: Everything is just so well done and looks so great and authentic (including, by the way, Pitt's makeup). It's just a pity the film smears things out into a big mushy pile of symbols.
Interesting scenes: Did Blanchett, portraying a ballet dancer, really do her own dancing? Most of the time you see a cut just before the face can be identified, but that is not always the case.
Technical assessment: Fincher was always in love with high contrast stock and this is no exception. Sound wise, the things are hardly ever aggressive yet you can feel yourself right in the thick of things; a great job for a subtle effort rendered even better by the Blu-ray's Dolby TrueHD soundtrack. The musical score is worth it's own mentioning: I wasn't surprised to see it was recorded and mixed by Shawn Murphy, probably the best guy in the world for this job.
Overall: There was a lot of fuss around The Curious Case Of Benjamin Button and I can see why; it couldn't have been a success on the merits of its artistic qualities alone. I'll be generous and give this fussy affair 3 out of 5 stars.
Posted by Moshe Reuveni at 6/07/2009 10:27:00 pm
Email ThisBlogThis!Share to TwitterShare to FacebookShare to Pinterest
Labels: Film