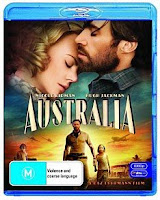 Lowdown: A western set in Australia and packed full with clichés.
Review:
I find it hard to recall a film that has been hyped as much as Australia. Marketing noise attacked me from left and right; news reports on these vile Americans that failed to flock to their measly cinemas to watch “us” were airing regularly on the news; the Australian Government used the film to promote the brand name called Australia; and controversy on whether the film gives an accurate impression of the times and the way white Australia treated black Australia reigned high. Australia became a film I was quite curious about even though I knew it wouldn’t amount to much. Now that I finally got to watch it I can confirm my initial prejudice: Australia doesn’t amount to much.
Set during World War II, Australia takes place in the Northern Territory. Nicole Kidman is a British aristocrat coming to pay her husband a visit only to find him murdered and the cattle farm he was running in shambles. She realizes things have gone wrong mainly because of David Wenham, a farm employee that seems to be working for the farm’s main competitor, so she gets rid of him and thus turns him into the role of the film’s evil baddie. She does need someone to help her out running the farm, though, so she gets the services of Hugh Jackman, a drover. Jackman & Kidman Ltd need to run a huge drove of cattle to an army shipment taking off at Darwin, and the question is – will they make it against all odds and against Wenham?
The plot thickens as we move along (as much as shallow plots like this can thicken), with Kidman and Jackman falling for a young kid of a mixed blood (as in half aboriginal half Wenham) and the Japanese making themselves heard.
The end result is two and a half hours of a film that is never really boring but never really says anything we haven’t heard or seen before. The only exception I can think of is the fact that Australia’s cast features pretty much every Australian born that ever happened to pass by a cinema screen.
That, and perhaps the title of having most cinematic clichés packed in a single film ever, and pretty much uses up everything up the Australian lexicon. Take Kidman’s character, for example: She plays this aristocrat that steps out into the dirt and gets annoyed with it. Thing is, we’ve seen this so many times before that it’s pathetic. That’s not the only problem with Kidman’s character: As an actress, Nicole Kidman has repeatedly proved her merit; yet in Australia she is just awfully bad. She overacts so badly I suspect I could have done a better job myself (in a female role).
Everything is so shallow the film expects us to settle with Jackman’s character being referred to as “Drover”. Since when do we call people by their profession? Luckily, there aren’t any porn stars or call girls in the film.
Beneath all the clichés, Australia is a nicely packed western that aims at too many targets at once and misses most. It’s got beautiful scenery shots on the positive side, but that’s it, and even those are marred by the obvious excessive use of blue screen technology.
As for the film’s reliability in conveying the facts of the period: While, through ignorance, I cannot comment much about the authenticity of the white/black relationships portrayed in the film, I can say that Australia starts off with another complete misrepresentation of the truth. As the film’s title shows up in the opening credits we have this kid doing the narration saying “Australia”. Well, wrong! Ask the average Aussie what country/continent they live in and the answer would be much closer to “sht-eya”. I guess that’s as good a sign as any that Australia was designed to please the [American] viewing market rather than convey any meaningful statement whatsoever.
Best scenes: Although cheap and corny, Australia does have a couple of uplifting moments. Those come down to characters we thought dead showing up alive at various points in the film with some very dramatic music in the background.
Technical assessment: As Blu-rays go, Australia is exemplary in both sound (DTS HD) and vision. The music is well recorded, too. This is reference quality material, hurt only by the previously mentioned overuse of special effects that are simply not Blu-ray grade.
Overall: A poor 2.5 out of 5 stars effort of a film that does not represent the real Australia at all.
Posted by Moshe Reuveni at 4/09/2009 11:04:00 pm
Email ThisBlogThis!Share to TwitterShare to FacebookShare to Pinterest
Labels: Film

I forgot to mention the ultimate proof for Australia's inaccuracy: flies.
Throughout the film you don't see even one fly around. However, as every Australian knows, and as most tourists to Australia will know, (1) where there are cows there are flies and (2) the Northern Territory is swarming with them.
My point is simple: Australia tries to round the edges off.

Sheesh, you are difficult to please. That's like saying in order to have an accurate American film it needs to show the characters making at least one trip to McDonald's.

I do really want to see Australia, for two reasons: Hugh Jackman and Baz Luhrmann. But really, I was scratching my head during previews, thinking "is this one movie or three?"

I guess I am.
The difference between your accurate American film and Australia is that the latter actively takes upon itself the task of representing Australia. It does so with its title, with its narration, and with its marketing.
"Your" American films, however, hardly ever assume the responsibility of representing what their country stands for; you don't see many films calling themselves "USA". Exceptions I can think of are Bruce Springsteen's "Born in the USA", which does a good job telling an American story through music, and "How the West Was Won", which does a nice job at being an effective epic.

As for the two names you've mentioned:
I agree that Jackman is a worthy actor, but he is also an actor that played in no good film I can remember off the top of my head. No, X-Men does not count as a good film[s] in my book.
And Luhrmann? Way too eccentric for me (for the record, Australia is not an eccentric film).