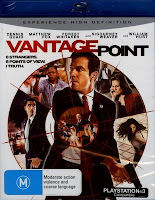 Lowdown: A Rashomon like take on a presidential assassination attempt.
Review:
Akira Kurosawa Rashomon from 1950 is one of those films that many have borrowed ideas from. The concept of having the same story told from different subjective points of view until the objective truth is exposed is, indeed, widely mimicked. Vantage Point is one of those films to have another go at the Rashomon formula.
Boasting an extensive list of A class Hollywood stars, the reason why we’ve decided to rent it in the first place, Vantage Point puts us at the opening ceremony of an anti-terrorism convention held in Spain. The convention’s main player, the president of the USA (William Hurt) is due to arrive, with many in the crowds viewing him as the world’s biggest villain. This seems to point at the Bush era as the period the film takes place in.
Hurt arrives accompanied with a large bunch of security people, most notable of which is Dennis Quaid. A year ago, Quaid took a bullet for Hurt and now this task represents his return to proper duties. Guess what happens next? Just as the president arrives, he gets shot; soon afterwards an explosion rocks the area, and seconds later another explosion takes the entire platform where the opening ceremony should have taken place apart.
What follows next are repeats of these events, essentially the half hour or so before the assassination attempts and afterwards, as viewed by various stakeholders. These include Quaid, Hurt, Forest Whitaker (playing an American tourist who finds himself in the thick of things) and several more. The idea is probably to show us the events from different points of view, but in reality this mechanism is not as well utilized as in Rashomon; effectively what Vantage Point does is to show us things from the point of view of those who have no clue about what took place first, and slowly move on to the point of view of the perpetrators who do know what's going on. Thus, instead of providing us with a philosophical statement on the nature of reality and perception we are taken for a rather deceptive ride where things are purposefully hidden from us in the beginning but slowly get exposed to us later on. It’s more of a detective story than anything else, but it’s all artificial and entirely under the control of the director that chooses which information to provide us with and when.
In many respects, Vantage Point is not unlike things we’ve all seen before many times. There are a few loopholes in there that don’t make much sense, but for a Hollywood made film these are not too bad and overall Vantage Point is not an insult to common sense.
Where Vantage Point does fall is in its American chauvinism. The whole thing takes place in Spain, yet barring some minor “incidents” everyone speaks English and everyone’s English is quite good; that’s definitely not the case in countries like Spain. More than that, in Vantage Point’s world everyone watches CNN (or GNN, the way the film refers to it), including pubs and such; I think you would have a hard time finding a public venue airing CNN in Europe, unless that place is targeting Americans as its clientèle. Overall, we are not talking about major chauvinistic offenses here, given that most American films take it for granted there's not much to this world but their own country (perfectly understandable given their target audience, yet still regrettable). Thing is, in a film that tries to tell Americans there is more to this world than their country, these minor issues contribute to detract Vantage Point’s credibility.
On the plus side, I do have to say that Vantage Point is a very thrilling thriller. At around 90 minutes long this is a relatively short film, but through extensive parts of its short lifespan it managed to keep my heart pumping at a rate that not many other films can equal.
Technical assessment: Vantage Point is a demonstration for Blu-ray done right. The picture is excellent and full of detail, and the very detailed Dolby TrueHD soundtrack knows how to keep things subdued one minute and how to pump things up with energy the next.
I want more films to be like this one, please!
Best scene: Which one, really, given that most of the film repetitively shows you the same scene from different objective perspectives?
Silliest scene: As I said, there are some areas where suspension of disbelief is suspended. Like in the concluding car chase, where Quaid proves that you don't need an airbag or a seat belt to survive a series of traffic accidents (including one with a truck); you just need to be the star of the film. It's yet another interpretation of the movie world's endless clip syndrome.
Overall: Vantage Point is a rather forgettable 3 star film, but I’m giving it 3.5 out of 5 stars to commend the quality of its Blu-ray presentation in recognition of the difference it has made to the viewing experience.
Posted by Moshe Reuveni at 2/19/2009 10:33:00 pm
Email ThisBlogThis!Share to TwitterShare to FacebookShare to Pinterest
Labels: Film

In retrospect, this is a bland 3 star film.