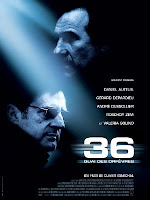 Lowdown: Heat meets The Departed in Paris.
Review:
As far as writing movie reviews goes, Department 36 is one of the harder ones. This 2004 French production is one of those films that are good but not that good and where it is really hard for me to pinpoint at what it is, exactly, that detaches them from excellence.
For excellent it should be, at least given the lineup: this is the film that stars probably the biggest male guns of French cinema, Daniel Auteuil and Gérard Depardieu; the previous time I remember both of them sharing the screen, The Closet, has produced one of the better comedies I have the privilege to have watched. A joining of these two is not unlike Heat’s summit meeting of Pacino and De Niro, only that the French version sports actors that are much more versatile than their American counterparts. Auteuil, for example, has proven that he has much more to him than someone that can badmouth and sound cool enough to receive a ticket to the mafia: he played in comedies, he played tragedies, he played as a romantic hero, he did period films, and in 36 he is even a rough policeman and a bit of an action hero.
Department 36, or as it is known in French 36 Quai des Orfèvres (after the address of Paris Scotland Yard’s equivalent) revolves around two police officers, our two big guns, in charge of competing anti-rough-crime units who fight it out for the role of police commissioner. Auteuil is the main star here and we get to know a lot about his character through his interactions with criminals and colleagues; we learn, for example, that in the tough world of fighting the tougher criminals there is not that much of a distance between the tactics of the criminals and the tactics of those whose duty it is to fight them.
Talking about rough criminals, 36 starts off with a very cruel armored car robbery. As it turns out, this is but one in several such robberies, and the police are under pressure to find them robbers. Just the right ticket to guarantee a would be police commissioner the role, isn’t it? Depardieu is pretty desperate to get it and in contrast Auteuil is actually pressured to apply; fate and knowing the right people puts the tip on that vicious gang in Auteuil’s hands.
That tip comes with a price, though: the convict who tips Auteuil takes him for a ride in which he commits the brutal murder of a fellow criminal and uses the policeman as an alibi. Auteuil finds himself between a rock and a hard place: betray his contact and risk losing the coveted gang or follow the law to the letter?
He chooses the first option. Yet when the evil gang is ambushed, Depardieu has his own moment under the sun: unable to bear his opponent’s success at locating the gang, he drinks a bottle and goes out on his own to arrest the criminals. The rest of the police are forced to a less optimal battle and several of them are hurt, including the most senior cop in Auteuil team getting shot in the head.
A clash between our two leads is inevitable, and let me assure you: This time, it’s personal.
What evolves from this starting point is a thriller full of unexpected twists and turns where ethics and morality are tested. The type of conflict at hand, between the seemingly good and the seemingly bad yet overall very gray, the excellent supporting roles, and the heart pumping tension that results, are not unlike the conflict at the center of The Departed.
The problem is that I have the exact same problem with 36 as I have had with The Departed: although 36 is a good film, it didn’t feel like it was taking me anywhere new; I wasn’t swept away. Granted, 36 is a much better film than The Departed: the acting is at a level of its own and, unlike the American flick, this one stays on the right side of going over the top. Yet when all is said and done, 36 is a film you would forget over time.
Best scene: An imprisoned Auteuil overtakes two armed guards in some nifty commando action. Now, for the record, me telling you his character has been imprisoned is not a spoiler; the film starts with him in prison and then goes back in time in some sort of a fatalistic flick. The key element to this scene is the action, given that Auteuil did not acquire his reputation as an action hero (do correct me if I’m wrong); when the action comes, it’s unexpected.
Technical assessment: As with the previously reviewed The Way We Were, we watched 36 through our PVR after it went on air on SBS. The key difference, though, is that SBS broadcast the film in its original aspect ratio of 2.35 to 1. Hail SBS!
Overall: Good, but should have been better. 3.5 out of 5 stars.
Posted by Moshe Reuveni at 2/26/2009 08:53:00 pm
Email ThisBlogThis!Share to TwitterShare to FacebookShare to Pinterest
Labels: Film

You don't think Pacino and De Niro are good actors?

I think they're very good actors. I really like De Niro's pirate in Stardust, and I even liked him in Godfather. All I'm saying is that these two keep on playing the same roles all the time.

You are right in the sense that I knew I'm going to regret that comment I have made less than a second after writing it.