The World Without Us by Alan Weisman 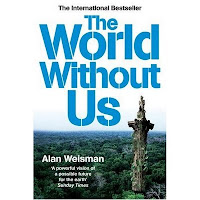 Lowdown: An overview of humanity’s impact on the world.
Review:
I first heard of The World Without Us through Scientific American, where it got glowing reviews and where it earned a recommendation for being 2007’s the top of the crop in popular science books. The idea behind it is, indeed, intriguing: what is to take place in this world if all humans were to just suddenly disappear? What will happen to our cities and all the monuments we’ve left behind? Eager to find the author’s answer I dived into the book but quickly enough I have found myself rather disappointed. Although it starts with a nice idea and its contents is extremely interesting, the execution of The World Without Us is severely lacking.
In general, The World Without Us tries to assess the impact humanity has had on this world by examining:
1. What the world would have been like if humanity was never there to begin with,
2. What changes we have done to this world, and
3. What effect will these changes have in a future with no people around.
Essentially, the book’s lengthy answer to these questions can be summed up with:
1. Humanity has had a decisive and destructive effect on anything it touched since leaving its original home in Africa.
2. However, as great and as pivotal to this world as we might think ourselves to be, our long time legacy to this world will not be much more than some unnatural concentration levels of metals and other materials left deep underground for a future archaeologists to dig. Nothing we do, not even the Panama Canal (humanity’s biggest single achievement, size wise) will last long after us.
3. While there are many threats to humanity, the chances of it all disappearing are low.
4. In the shorter term, we are wrecking havoc upon this world with our petroleum industries, nuclear wastes in their various guises, the plastics we recklessly cast around, and much much more. Indeed, reading through this long list of horrors is one of the book’s biggest eye openers.
The World Without Us’ conclusion is imminent: Humanity is this planet’s most troublesome pest; if humanity wants to stay around a bit longer, it should take drastic measures to drastically reduce the world population to a sustainable level (estimated at between a billion to two, less than a third of its current number).
Overall, by walking its reader through subject after subject where the human impact upon this world is evaluated, The World Without Us has the potential to be an intriguing read; as the book itself testifies, we humans are really great in ruining this planet using many an ingenious way. Problem is, the book is compromised.
My first issue is with the book’s reliability. For example, it makes the claim that the Sahara Desert has become a desert due to human activity (albeit a long time ago). That huge claim is left rather unsupported, whereas I am of the view that big claims require big proof. Sure, proof may lie somewhere in the book’s thick list of references, but come on: one doesn’t buy a popular science book to go searching amongst dozens of scientific papers. In my view, if you want to make a claim as big as this one, make it; but do provide thorough explanations as to why you have allowed yourself to make such a claim.
The main problem with The World Without Us, though, is its style. Descriptions are over-lengthened in the process of providing a reality TV like atmosphere to the book’s descriptions. It manifests itself throughout the book, say when the author describes an interview with some expert and talks, at length, about how the expert’s coat is blowing in the wind coming from the south east thus making its wearer look like a prophetic prophet as he stand at the corner of the corner and looks to the setting sun with a very gazeful gaze in his two eyes, the eyes he has been using since he was born (but not while asleep). You catch the drift.
Similarly, the book tends to delve into grounds it shouldn’t delve to in the first place. The book’s conclusion is the best example, where the author goes to acquire the consultation of religious authorities in order to see what can be done in favor of the earth. What is the point of that? Why are these religious “experts” any more qualified to provide such answers than, say, a dentist or a plumber? And it’s not like they provide any meaningful tips anyway; they answer back with the same wishy-washy material the author seems to love so much.
Overall, it feels as if The World Without Us was based on a bright idea that was wrapped in a cover designed by some marketing department so it would sell, because someone decided that books sell better if they feel like reality TV and if they include stuff Mr and Mrs Average can relate to (regardless of relevancy). At the end of it all, the “world without us” trick – that is, the book’s core idea of trying to see what would happen if we were all to miraculously disappear – is just another marketing gimmick. At its core, The World Without Us is a good ecology book with enough wrappings on top to make it mediocre book dealing with ecology.
Overall: A promising yet disappointing book. 2.5 out of 5 stars.
Posted by Moshe Reuveni at 12/30/2008 08:43:00 pm
Email ThisBlogThis!Share to TwitterShare to FacebookShare to Pinterest
Labels: Book