Ubuntu for Non-Geeks by Rickford Grant 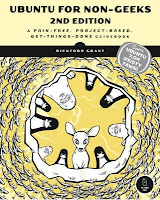 Lowdown: Your entry ticket to the world of Linux.
Review:
About a year and a half ago, following conversations with professionals, articles I have read, and most importantly lots of accumulated frustration with the way my PC was behaving, I first started entertaining thoughts about checking the world of Linux out as a potential replacement for Microsoft Windows. A recommendation in Bleeding Edge, one of my favorite technology blogs, talked about giving Ubuntu a try as the easiest way for Windows veterans to get into the world of Linux; it added a recommendation for the book Ubuntu for Non-Geeks as a good resource to have with you when taking the first steps.
Following the recommendation, I got the book through Amazon as one of the many books in an order. For months afterwards the book just gathered dust on my shelf. That is, until I gathered enough confidence in Ubuntu’s ability to reliably install itself in dual-boot mode on my PC (that is, installing itself as an option you can pick from while booting your PC, in addition to the existing installation of Windows) and until I just couldn’t take Windows’ misery anymore.
I read the first couple of chapters that talk about the installation, read a bit further more, and then read a few more installation articles on the web just to make sure I’m on the right track… and then I took the plunge using the Ubuntu installation CD supplied with Ubuntu for Non-Geeks. Since then, Ubuntu Linux has been by far the preferred environment on my PC. It would have been the only environment had it not been for applications exclusive to Windows (e.g., Outlook and Photoshop).
Introductions aside, what can I say about Ubuntu for Non-Geeks as a book? Well, as the name implies, this is not a book for computer experts; given enough patience, my mother should be able to take this book and use it in order to get Ubuntu up and running. That, however, is also its downside; even though the book contains more advanced material than my mother would probably care for (such as instructions on how to deal with scanners), it does not contain enough for those used to making the most of Windows and who really want to replace Windows all the way. In short, what I am trying to say here is that although Ubuntu for Non-Geeks is squarely aimed at those that are tired of Windows and want an upgrade, and although Ubuntu for Non-Geeks will serve you well as you start your upgrade, it will not take you all the way up the hill. You could regard it as a problem with the book, only that I am not aware of other books that are targeted at non-pros which would take you all the way either. Besides, let’s be frank: I have never finished reading Ubuntu for Non-Geeks, only using at the start of my Linux career; once inside, I found that I could Google my way to all the instructions and all the solutions I could ever want (mainly through the substantial and informative Ubuntu forums). Going further on that point, you don’t really need Ubuntu for Non-Geeks to begin with; you can find similar advice scattered all over the internet. The book’s advantage is in it being there by your side, always handy, and almost all encompassing as you start your way. And it does this specific job well.
Now that I hope to have answered the question of who the book is aimed at, I will finish this review off my providing an overview of the topics covered by the book. Well, you have your basic installation guide, get to know thy new desktop guide (and also thoroughly customize thy desktop guide, in case you thought Windows’ Aero interface is powerful), using the web, using the Linux terminal (a must for Linux users no matter what they tell you), installing applications, protecting your PC, handling peripheral equipment (from printers to iPods), and overall a pretty thorough overview of the various applications that come bundled with Ubuntu. Most people don’t realize it, but whereas Windows provides you with not much more than an operating system, with Ubuntu installed you already have most of what you need already there (word processing and spreadsheeting included, as well as stuff that would give Photoshop a run for its money).
Last, but not least, it is important to mention that the insight gained by Ubuntu for Non-Geeks is not limited to Ubuntu alone; most of the explanations are valid for other Linux distributions just the same, with my Asus Eee PC’s Xandros distribution serving as a real life example.
Overall: I will not give this book a star rating. Instead, I will settle with mentioning it has served me very well as a confidence inspiring tool when I started my journey into the Linux world.
Posted by Moshe Reuveni at 12/05/2008 12:28:00 pm
Email ThisBlogThis!Share to TwitterShare to FacebookShare to Pinterest
Labels: Book