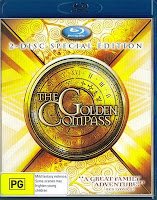 I highly recommend you read the trilogy which I think are classics. I didn't mind the movie, but it just can't do the books justice in my opinion. Quite happy to lend them to you if you like and I also have them read as an audio book by the author and cast which is on of the best audio books I've heard (hey I'm somewhat biased, I'm an unashamed Pullman fan).

I really do want to read the books and I'm currently waiting on the next round of discount vouchers from Borders before I go and buy them.
I have to admit I haven't heard of Pullman (the author) before: I burnt out on fantasy reading during high school, when fantasy was most of what I read; now I tend to regard fantasy with some contempt because a lot of it is equivalent to cheap crap romantic novels as far as literature value is concerned. His Dark Materials (the trilogy of which Golden Compass is episode 1) seems to be a worthy exception with which I can confidently renew my acquaintance with fantasy books.

As for lending me the books: Thanks, but it does take me ages to go through a book nowadays. I suspect our entire reading household would want to read the books, too.
As for audio books: I prefer the real deal. You don't concentrate as much with audio books... BTW, I have heard reliable sources claim you can download any audio book you want from the internet.
Still, thanks for the offer!

I really liked the first book and enjoyed the second. The third - not so much.

And I have all three books on the way from Amazon. It's Borders' fault, really: they didn't have the boxed set and buying the individual books, even with a discount, would still cost more than Amazon. I was also annoyed by them not accepting their current 20% off all fantasy books discount because these books are not "fantasy" but rather "young adult".
Anyway... It would probably take me a year till I can comment on the books' quality...