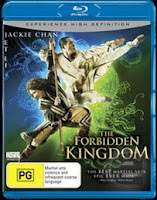 Lowdown: Homage to the martial arts genre.
Review:
It might not seem this way to the naked eye, but I have a soft spot in me for martial arts films. Of those, I particularly like the films starring Jet Li, for their general style that takes itself so seriously it’s actually good laughing material (the same way that a Rambo or a Rocky film would work). Most of all, though, I like the Jackie Chan films: the guy obviously knows his martial arts, but he also knows how to generate a laugh out of his skills and generally speaking never takes things too seriously.
Given my general appreciation of violence, or rather lack of appreciation for violence, not taking things seriously is of major importance. The Forbidden Kingdom thus offers a unique combination: featuring both Li and Chan as its stars, it has both the serious and the jocular together. Which side wins? The good side, of course, as we end up having ourselves a feast of film mediocrity but an overall very entertaining film to watch. That is, we have ourselves the exact type of a film experience one should expect from a good martial arts film.
The story follows a teenager from South Boston (a virtue I mention mostly because it is repeated again and again, as if one is expected to know there’s something special about the place). He is rather eccentric (or the story is set a few years in the past), as the guy has a room full of martial arts decorations, a Sega Dreamcast games console and a CRT TV. The room’s a museum piece, in short. Our guy dreams of martial arts but doesn’t practice it, and in real life he’s a nerd that’s commonly abused by a gang of kids thinking themselves cool.
One night this gang robs the Chinese pawn shop our hero frequents in order to get his martial arts DVDs. The kid’s involved, and with things going really wrong he suddenly finds himself transformed Last Action Hero style out of reality and into the imaginary world of ancient China, where magic is as real as reality.
There he meets Jackie Chan, who plays an alcoholic martial arts master, and together they escape the authorities. The authorities, it seems, are bent on preventing this semi-deity (Jet Li) from coming back to life using a magic stick in a background story that is supposedly loyal to Chinese traditions but sounds as outrageously convoluted as your average bible story. Never mind the story's sanity, though: as our heroes go about we are treated to lots of martial arts fighting, mostly with the aid of wires, and lots of Jackie Chan type hectic action scenes. The result is a film you watch with a constant smile on your face, a fun filled experience. Oh, there’s also a token girl thrown in as the martial artist’s love interest. To summarize this review’s plot summary: It’s best if you don’t pay much attention to the film’s plot, just go along for the ride.
Indeed, The Forbidden Kingdom is mediocre through and through. There is not much originality in it, instead opting to borrow heavily from films like Drunken Master and Bride with White Hair. However, while this may sound bad when you read it, the result is not bad at all: the result shapes up to be more like a homage to those films of the past. Treated as such, The Forgotten Kingdom is actually quite an excellent vehicle in taking the best out of the genre’s classic, starting from the choice of actors and ending with the good Hollywood production values as opposed to the tight budgets of yonder.
Picture quality: A mixed bag. Some scenes are an insult to the Blu-ray format’s capabilities with heavy compression on picture detail, others offer so much insight you can see through the special effects much too well, and others are offer tantalizing views of Chinese scenery (where The Forgotten Kingdom was shot).
Sound quality: The Forgotten Kingdom, with its DTS HD soundtrack, is the first Blu-ray film I got to watch that seemed to deliver the promise of “high definition” sound. Sure, as a movie soundtrack it’s nothing special (nor is it bad); it does, however, feature effortless sound emanating from all speakers without that aftertaste conjured by lossy compression. Made me want more, made me crave for a good quality Blu-ray title that would give my hi-fi a workout.
Overall: Much more entertaining than what its 3.5 out of 5 stars rating would suggest.
Posted by Moshe Reuveni at 12/13/2008 11:02:00 pm
Email ThisBlogThis!Share to TwitterShare to FacebookShare to Pinterest
Labels: Film