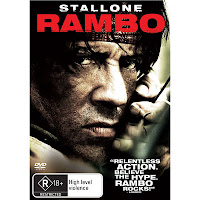 Lowdown: The world’s greatest pacifist is back.
Review:
Sylvester Stallone must be going through a midlife crisis. He’s so desperate to have his presence on the radar that he did a final episode of Rocky a year ago and now he’s revisiting Rambo. The question is, again, does the old series need revisiting, and if so – is the new visit up to the task or is it just sinking in Vietnamese mud?
The question certainly deserves asking. While the first Rambo, First Blood (based on a book by a similar name), was a high octane action film dealing with the trauma of coming back home from Vietnam, the rest of the series took a turning. I was told that John Rambo dies at the end of the book, but in the films he’s back to sort this world’s problems and some under-population problems in the next one, too: First he sorts Vietnam out and then Afghanistan. Who cares if such sorting as his doesn’t really seem to sort anything out in real life? Not Stallone!
Thus we start Rambo with Stallone living a meek’s life in Thailand when suddenly his peaceful life is disturbed by a gang of American Christian missionaries who ask for his help: they need a guide to drop them off in Burma, where they can support their Christian brothers and sisters as they get the crap beaten out of them by the local authorities. At first Stallone won’t budge; he’s seen it all before and he knows those people are putting too much faith in their ability to change the world. Luckily for the Christians, one of them is a good looking woman, and through sophisticated arguments and Rambo having the hots for her she gets him to help them.
The rest is as expectable as any Rambo film can be. The missionaries get caught by the evil Burmese; a party of mercenaries is sent to rescue them with Stallone providing transport; they do their rescuing; they get caught; the world is about to come to an end. That is, until Rambo puts his hand on a machine gun and all hell breaks loose.
For a short film (less than an hour and a half) Rambo packs quite a lot of heat. It is extremely violent and heavy on visceral impact: no precautions were made in order to guarantee a child friendly rating with this one; if anything, it’s the opposite, and a lot of effort is made to convince the viewer just how bad things are in Burma. You can argue this is a good thing, as something should be done by this world with regards to Burma and its very oppressive regime: millions of people are suffering there, and at best you read about it at the very back of your newspaper. But is Stallone’s way the right way for promoting awareness? I would prefer accurate accounts rather than bloody propaganda in disguise. I’m even more disgusted by the pitting of “us pure Christians” against the “evil Burmese”; while Burma may be extra harsh on its Christian population (I have no idea whether that is the case), history clearly indicates that more crimes were committed in the name of Christianity than probably anything else. What we end up here is just a simple brash philosophy of kill or be killed, and if that is what Stallone has to offer this world then he’s better off retiring.
Stop.
We are watching a Stallone film here, for gods’ sakes. What on earth makes me think I need to take things seriously? No sane person could have ever taken any of Stallone’s long list of sequels seriously; Rocky 3's B.A. Bourekas and 4's Drago were always a good joke. The same should apply here; a Rambo is a Rambo, not a contender for the next Palm d’Or.
When looked upon in this perspective, Rambo changes colors. From a brutal action film with a vicious agenda it becomes a nice farce that you watch with a smile on your face as you wait for Rambo to come and show this bad-mother-f*ck-ups where fish pee from. And show them he does, in a variety of colorful and imaginative ways.
When looked upon in this perspective, Rambo becomes a cool and the gang action flick that is actually well done: unlike most of its contemporary compatriots it does not feel full of cheap digital special effects and it does not sport overly quick editing and a nausea inducing fast moving camera. Come to think of it, I can’t really recall an action film of such purity and such good production values.
Between its short duration and its action scenes, Rambo is quite a flowing and exciting film. Personally, it left me waiting for Stallone's next visit to the past. What treasure will be unveiled in his next bout of nostalgia? Are we up for a sentimental look at Cobra?
Best scene: Rambo kills the evil boss character with a knife. He does it in such style and such panache it gave me a hard on (disclaimer: before anyone takes my words out of context, note I’m being sarcastic here).
Overall: As a film, Rambo is a bad 2 star film. If, however, you set your mind up to Stallone mode and watch it with a smile on your face and popcorn in your mouth then this one is a perfectly enjoyable 3 out of 5 stars experience.
Posted by Moshe Reuveni at 11/06/2008 10:44:00 pm
Email ThisBlogThis!Share to TwitterShare to FacebookShare to Pinterest
Labels: Film