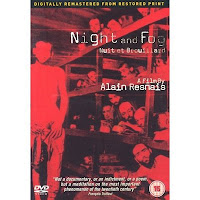 Lowdown: A look at Nazi concentration camps.
Review:
Night and Fog is an half an hour long French documentary dating back from 1955 which has been recently released on DVD. Built from stock footage and some new footage taken shortly after World War II has ended, Night and Fog discusses Nazi concentration camps: how they were built, how they were run, and how they were to escalate into places of mass organized killing. The documentary's name, Night and Fog, comes from the code name given by the Nazis to their policy of "relaxed" prisoner handling: instead of following the Geneva Convention and its likes they came up with their own set of rules.
Despite its short length, Night and Fog is quite effective at being chilling. It shows many sights most of us have already seen, to one extent or another: starving people being ill treated, people piled up on cargo trains, piles of bodies, the shower rooms, etc. However, it goes a bit further than most in exploring the evil: There is, for example, a thorough discussion on the products made out of the victims, from clothes of human hair through human soap and human leather. However, it is at its most thought provoking effectiveness in its discussion over the responsibility for the events that took place: It shows the hierarchy that took place in the camps, with the Nazis as well as the Kapo people who were prisoners with power over the other prisoners; and it also demonstrates how well purpose designed the concentration camps were. Such a level of design requires very thorough designers, which raises questions like: Who were those designers, where did they disappear to, and most importantly - how could they do such a thing in the first place?
The result is that Night and Fog is straight and raw; this is no Schindler's List style sweetened and entertaining Holocaust flick.
Best scene: A slow pan over a concentration camp's toilets demonstrates the level of cruelty involved with robbing the prisoners' sense of identity and humanity, as well as the careful design that took place in the camps' construction.
Technical assessment:
The material's age does show. However, the most annoying thing with Night and Fog are the subtitles: as the French narration gets ahead of itself with "enthusiasm" over the material, which he does way too often, the subtitles are having a hard time keeping up and change too quickly for mortals like me to read. If a none French speaking viewer wants to watch this and not miss out a thing, they have to sit patiently with their remote in hand and be prepared to rewind and pause way too frequently. In short, what I am trying to say is that the subtitles were rather badly designed.
Overall: It's hard for me to rate Night and Fog. On one hand, it's effective, and its short length only raises its effectiveness. On the other hand, though, through the badly designed subtitles, it's rather annoying. I'll rate the experience at 3 out of 5 stars but mention that the contents itself is worth more.
Posted by Moshe Reuveni at 9/24/2008 10:35:00 pm
Email ThisBlogThis!Share to TwitterShare to FacebookShare to Pinterest
Labels: TV