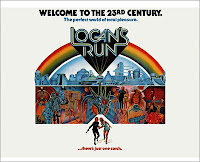 Lowdown: The Island on drugs.
Review:
I don't think you can say I'm a fan of Michael Bay; his films are heavy on commercialism and low on originality. Some of his films are still okay, and The Island is one of them. Watching Logan's Run I realized where Bay got his inspiration for The Island from. Not only that, I also got to appreciate Michael Bay much more than before, simply because Logan's Run is quite a bad film.
Logan's Run is a 1976 science fiction film featuring Michael York as its star. As the caption at the beginning of the film tells us, the film takes place in the 23rd century. After wars have ruined the planet, people are living inside domes where all their needs are taken care of by machines. The only catch is that no one makes it past 30 unless they get chosen by The Carousel.
As the film starts we see what this Carousel is all about. A group of people go into it in order to perform some rite while the rest of the dome's population watches as one by one they get killed by a mysterious psychedelic revolving killer beam. Those, it turned out, were the people who got to the age of 30; it also turns out none of them was chosen by The Carousel to live past 30.
Some of the population do not like the prospect of dying at 30, so they choose to run away. However, running away is hard, because they all got this tracking devices on them, and because there is a special police to track and kill the runners. Michael York is a member of this special police force, and he kills the runners with much delight; he really enjoys it.
But then this coincidence happens: York meets this girl that dares to ask questions about the way people live and the things they do in their lives; she's saying things she should not be saying, like her not wanting to die at the age of 30. At first York laughs her off, but then the computer running the show pits him in a tough situation: in order for him to track a group of successful runners, it changes York's status to be a Carousel candidate and it asks him to use the desperation in his own situation in order to track the runners. York accepts the mission, and his only lead is that questioning girl. Together, they become runners and find that the outside world is not as bad as they were made to think; the question is where York's loyalties lie.
On paper, Logan's Run sounds like a terrific film on conformism, its dangers and the value of questioning. Alas, Logan's Run suffers in so many departments the film's message is never really felt until you find yourself summarizing the film while writing down a review.
Where can I start? Well, if I start chronologically, then the first problem is with the special effects; they are, well, crap. You can clearly see that all the city wide shots of the domes and such are miniature shots, and quite silly ones at that. Sure, I'm calling things from today's digital infested special effects world where everything looks so clinically correct, but those effects were crap even by 1976 standards. Remember, this film called Star Wars that had pretty good special effects was also released in 1976. Overall, Logan's Run suffers from relatively poor production values; these were probably good enough for 1976, but time didn't do them much good.
Then there's a very simple that is never answered: Why the hell do the people get killed when they reach 30 in the first place? I realize that a part of the film's appeal is that the film's population never bothers asking this question, but that doesn't mean the film should get away with not providing an answer, at least to explain what made the concept take off in the first place. I would say this is the most obvious difference between Logan and The Island, because in The Island the reason is vital to the film's development.
Moving on, there are so many things in the film that just don't make sense I won't even pretend to be able to come up with a comprehensive list. As I don't want to spoil too much of the film, I'll settle with one clear example: After Logan escapes the dome to the outside world he finds this old man, Peter Ustinov, who spends his time talking nonsense and feeding his cats. Now, if you're the only person in the world around you, how come you can afford to talk bullshit and feed your cats? You would have to work day and night just to supply your own food requirements.
Worst scenes: The scenes where the music is too loud, which represent quite a significant portion of the film. The music is screeching and annoying psychedelic sixties stuff; that said, it fits the general spirit of the film in that it's just as crappy as the film it accompanies.
Overall: The idea is nice, but instead of appreciating the idea you just end up feeling like the movie makers were on drugs when they made Logan. 1.5 out of 5 stars.
Posted by Moshe Reuveni at 8/06/2008 10:23:00 pm
Email ThisBlogThis!Share to TwitterShare to FacebookShare to Pinterest
Labels: Film

Star Wars was released in 1977, and the special effects in that weren't very good either, especially when the black backgrounds in space didn't match up. It wasn't until he redid them in 1997 that they looked decent.

If Logan's Run seems trite and cliched now, that's because it's been copied so many times. It wasn't a cliche in 1976.

Hi Julie and welcome.
As you might expect, I would like to have a quarrel with you. As the very proud ex-owner of the original Star Wars collector's edition laserdisc I can tell you that I have watched the film dozens of times in its original version and was never troubled by black backgrounds, nor did I have any issues with any of the other special effects. Granted, "my" version was carefully prepared and is bound to be better than your average VHS, but still...
For the record, I have only watched Lucas' renewed version twice and I think it sucks: all the additions make it quite childish and serve to lose a lot of the original's charm.
So no, I don't think there were problems with Star Wars' special effects.
Mind you, there were other, even earlier, sci-fi films where I don’t have particular issues with the special effects. Say, Fahrenheit 451, which was obviously made on the cheap but managed to get along through a wise choice of sets.
Anyway, back to Logan: I don't think the film is cliché at all; I think the idea is very good. My problem is exactly what you say: this film that might have been good back in 1976 did not survive the ravages of time very well, therefore I wouldn't rush to recommend it.