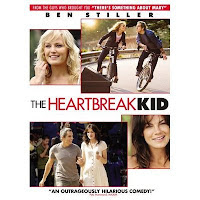 Lowdown: A married guy falls for another woman. During his honeymoon.
Review:
Like them or not, I do not think there can be much dispute on There’s Something about Mary being the peak of the Farrelly brothers’ achievements this far. Personally, not many a film made me laugh as much as Mary did when I saw it at Times Square back in 1998 (where did those ten years disappear to?).
In their latest, The Heartbreak Kid, the brothers have re-collaborated with Mary’s star, Ben Stiller; and to further emphasize their position, they’ve thrown in Stiller’s father, Jerry Stiller (immortalized as George Costanza’s father). Ben & Jerry have already collaborated in the legendary Zoolander. I have to say those renewed collaborations worked: The Heartbreak Kid is a very funny film, a comedy that breaks some new grounds, and the Farrelly’s second best film thus far.
Stiller is once again a very flawed hero. This time around he doesn’t hire a detective to do his work for him, though. Stiller is the owner of a sports shop in San Francisco, he’s around 40 or so (give or take some makeup), and he’s on his own. His ex fiancé, which he left for no particular reason other than him being unable to commit to anything and to stop searching for the negatives in her, gets married as the film starts. We are introduced to Stiller’s best friends as they mock him when he gets seated at the kids’ table during the wedding ceremony.
Salvation comes when Stiller tries to help this very wow looking chick who gets mugged in the street (and let me tell you, at that stage of the film it feels as if every shot is there to give you a glimpse of some San Francisco views; not that there’s anything wrong with that). Stiller misses out on getting the chick’s details, but eventually she visits him at his store and they fall for one another.
They fall for one another, but they don’t really know one another. They don’t even have sex because the chick doesn’t want to rush into it. Quickly enough, though, work orders the chick to move to Rotterdam, and the only way in which the couple can stay together and the relocation can be cancelled is through marriage. And yes, Stiller takes the plunge and gets married.
Which is when the film really starts. As the wedding ceremony commences, Stiller meets the chick’s ugly mother, not a good indicator for his wife’s future looks. As they drive to their honeymoon destination in Mexico, the new wife drives Stiller crazy with her singing to the car radio. And so on and so on: Before you can say Blue Steel, Stiller has changed his mind about the whole wedding thing. His ongoing fears about marriage have, indeed, materialized.
Which is when he meets Michelle Monaghan (whom I remember quite favorably from Kiss Kiss Bang Bang) at his honeymoon resort. Circumstances cause them to bump into one another, and the more Stiller bumps into Monaghan the more he realizes that she is, indeed, the one he should have been with. Or is she? And what of his wife?
All of the above sets the stage wide open for a collection of Farrelly brothers type jokes. Some are silly, some are hilarious. The overall feeling, though, is quite good: between the grotesque characters of Stiller’s real life father and Stiller’s wife, Stiller’s nasty betrayal on his wife passes by while we, the viewers, actually identify with him. The Monaghan romance is charming, especially as it involves plenty of soft jokes on Southerner’s IQ.
Ultimately, The Heartbreak Kid is a pleasure to watch. Not the deepest film ever, excuse the understatement, but a very funny film – exactly what most of us need most of the time.
Memorable scenes:
I've said earlier that The Heartbreak Kid breaks new ground as a comedy, and now it's time for me to explain. The most unique element about the film, in its context of being an American comedy, is that the humor doesn't end when the characters enter the bedroom and there is no cut when they enter the bed. Heartbreak Kid features sex scenes and even a bit of nudity. This is no porn, but it's much more than you usually see in American cinema; kudos to the Farrelly brothers for not caring about offending a few pure souls. The sex scenes are probably the most memorable ones in the film, mainly because they are so unique. You can argue that these scenes are just an extension of the Farrely brothers' history of gross escapades, but I would argue they significantly enhance the film - they progress the plot and they are hilarious. That, plus the fact a bit of nudity never hurt no one.
Overall: The Heartbreak Kid is a good laugh and a very welcomed trend in comedy. 3.5 out of 5 stars.
Posted by Moshe Reuveni at 8/01/2008 11:33:00 pm
Email ThisBlogThis!Share to TwitterShare to FacebookShare to Pinterest
Labels: Film

First the Fatboy, and now this. Next you’ll be watching The Witnesses or some other Emmanuelle Beart movie.

I had pretty low expectations from this movie. I didn’t know it was based on a Neil Simon play (which is a good thing, for me) and I thought I was going for a mindless Dumberer & Dumbererer.

I was still disappointed.

The first half of the movie was great. Especially that disillusionment that starts at the wedding. And you can totally get Eddie falling for Miranda.

But as soon as he knowingly betrayed Lila I lost interest. If the guy is such a creep, why would I care what’s happening to him? From then on, I nearly ran out my watch battery from looking at the time every two minutes. The only time I laughed until the very end was when Eddie was beat up while trying to re-enter the states.

I don’t know why it affected me this way. As you pointed out, Mary’s Ted wasn’t exactly a boy scout either. Maybe it was because I enjoyed the first half that I was so disappointed in the second. Form me it was the least enjoyable Farrelly Bros. movie.

I can certainly see where you're coming from, but I actually went through the opposite: I was reflecting on how some of my friends committed themselves to long term relationships without really knowing what they're committing to, and what they went through in order to bail out. I agree and I don't think Stiller's way is the way to do it, but I can see where he's coming from. Then again, the movie clearly shows that Stiller is not a saint, but let's not spoil too much of the film.
That said, I thought those border crossing scenes were hilarious. On me they served to continue the "how would you handle it if the same happened to you" line of thinking.

As for Fatboy, we had no idea what the film was about; we rented it because of Pegg. And I never heard of The Witnesses before, although I have nothing against Beart (she even offered me the keys to her Parisian apartment once). Sadly, French cinema here doesn't get half the exposure it gets in Israel.