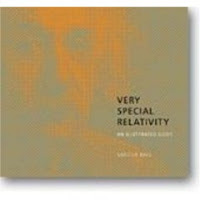 Lowdown: Einstein's theory explained through graphs.
Review:
Einstein's special theory of relativity is one of science's few achievements that everyone knows about, enough so that some brilliant person (albeit a probably significantly less brilliant than Einstein himself) came up with a brand name for baby toys - Baby Einstein. Anyway, cynicism aside, we've all heard of relativity, and most of us can quote the famous E=mc^2 formula. However, do we really understand what relativity is about, and for that matter, do most of us know what this formula actually means other than it being a brand name?
Speaking for myself, I am unable to say I understand relativity to a satisfactory level that would allow me to confidently discuss it with others. I was curious about relativity for most of my life, so when I heard of this new book by Sander Bais - an Amsterdam based physicist - called Very Special Relativity, I became curious. The thing about this book is that it's not just another lengthy textbook to bore the hell out of you while pretending to provide laymen relativity explanations; no, VSR is a thin booklet (albeit a thin hardcover booklet of 120 pages or so) that steps its reader through the various issues raised by the theory of relativity. Each of these issues is accompanied by a graph through which the reader is meant to be able to acquire instinctive apprehension of the subject matter. I guess you can argue that the strategy utilized by VSR is that of the "a picture is better than words" type.
Are the graphs and their accompanying text that easy to comprehend? Well, as Bais himself states early on, you do need to have some basic understanding in physics to start with (things along the line of x=vt); and in order to understand the graphs you need intermediate high school trigonometry. I know, trigonometry sounds scary, but nowadays I find it not half as bad as it seemed like during high school. Then again, nowadays I'm an engineer, so if high school trigonometry was to knock me off my feet something would have been really wrong. I guess the point I'm trying to make is that VSR should be approachable to most people, but not necessarily a trivial read.
Okay, we've gone through the prerequisites; can I say that now, after reading VSR, I understand Einstein's special theory of relativity?
Well, yes and no. First, a disclaimer: the book covers Einstein's special theory of relativity but only touches the edges of Einstein's general theory of relativity. Yes, there is a difference: it's the second one that deals with curved universes and such. Still, the first one is enough for you to build an atomic or a hydrogen bomb with, so one cannot complain.
The key message of this review, though, is that while I think I can safely say my understanding of Einstein's special theory of relativity has greatly improved, I still cannot say that I understand it enough to confidently discuss it with others. I seem to have lost the plot around page 80, when momentum issues started their involvement, which is not too bad when you think about it - it's 2/3 of the way. I understood the key messages following that point, but I cannot say I understood them well enough to now be able to develop them by myself. I suspect a lot of my problems were to do with my inability to read the book without significant breaks, which meant I forgot just enough in between sessions to allow me to drift away.
Talking about key messages, it's important for me to explain the book's approach: it does not explain how Einstein got to his conclusions; it merely explains what his conclusions are. It's like Inconvenient Truth telling you the weather is changing without covering the scientific research saying why and how it's changing. Is that bad? I say it isn't, because the book never tries to pretend it's more than a beginners guide.
Overall: VSR is not the world's greatest piece of literature ever, but it is a good attempt at explaining something quite unintuitive to the big masses out there. I will rate the book at 3.5 out of 5 stars.
In conclusion, I think it would be safe for me to say that Very Special Relativity would be at its best form as a series of interactive web pages featuring graphs that develop as you move along, thus allowing you to have an easier time following things up.
Posted by Moshe Reuveni at 7/26/2008 12:26:00 pm
Email ThisBlogThis!Share to TwitterShare to FacebookShare to Pinterest
Labels: Book