Time flies when you’re having fun and it flies even faster when you’re looking after a baby, but this blog is now celebrating its second birthday and the time has come to summarize another year of reviewing. Without further ado, let us have a look at the year that came and went and reward the crop’s best with the greatly coveted R-Wards awards.
See you next year.

Best Film:
As this past year started I have found myself in the rather awkward position of being a father a good few weeks before I was supposed to become one. Fatherhood, it seemed, brought with it the inability to watch films; pessimism hit me as the potential for severely reducing my film consumption hit me.
Happily enough, things didn’t turn out that way. Some time between six to eight weeks after our angel terrorist’s birth things have stabilized, and we begun watching films like there’s no tomorrow. Literally: With no babysitters at our disposal we could no longer go to the cinema (with one unique exception), so DVD’s were the order of the day. Luckily for us, DVD’s were never more accessible and never cheaper: renting three DVD’s costs us $4 to $5, allowing us to drown in source material to waste our time on. On its part, the internet has allowed us to access films that have so far eluded our reach.
The future, it seems, has many DVD’s ahead for us still. Blu-ray and its high definition counterparts would probably have to wait longer than the upcoming year for me to take them in; in my opinion, the technology has not matured enough to offer consumers a usable product that would last. Usability has certainly been made to suffer there in the name of copy protection! In my humble opinion, the future is with downloads and solid state storage, not even more sensitive optical discs. Anyhow, an upscaled DVD picture, although definitely inferior, can definitely give Blu-ray a run for its money; it’s in the sound department that the hi definition formats win through their potential for uncompressed sound.
Then again, with a baby in the house we have been forced to severely subdued listening levels, which have quite an impact on my overall satisfaction with films. That, as well as the all too frequently ill baby, mean that reviewing quantities are expected to be lower next year.
Our baby also has an effect on the choice films we get to watch. Having a baby means that I do not have as much time learning about new films, and the result is that during the past year we tended to watch the big name sequels rather than the quality stuff that tends to shy from the limelights. The result is that looking back, I find it hard to recall the names of films I have watched for the first time during the past year that truly knocked me off my feet. The names that do come up are Ratatouille, Stranger than Fiction, Eastern Promises, and the surprising The Band’s Visit.
However, this year’s R-Ward for best film has to go to Stardust. I like fantasy and science fiction, and Stardust is pure fantasy done right: thoughtful, imaginative and full of character. Looking back at last year’s R-Ward, Children of Men, enhances the point: I’m a sucker for good science fiction / fantasy. I wouldn’t be surprised at all if next year’s winner follow this trend, too.

Best book:
Despite its very rewarding nature, reading seems to be the first casualty when spare time is sparse. Thus, in my first year of parenthood, I managed finishing only ten dismal books.
In my defense I will say that I have also been reading three other books which I am yet to finish and I’m working on finishing, and that some of the books I have been reading this year are amongst the longest I have ever read (including a book that is undoubtedly the longest).
My reading preferences are the same as they have been, science fiction on the fiction side and popular science on the non fiction side. Between the two, my personal preference is for popular science, as evident by their higher average ratings. When it's well written, popular science offers me more bang for the buck when it comes to taking stuff out of the reading experience.
It is therefore no surprise that this year’s R-Ward for best book goes to The Ancestor’s Tale by Richard Dawkins. Unlike last year, where two books I have encountered were considered to be true masterpieces and the choice between the two was hard, Ancestor’s Tale doesn’t go that high. It is, however, a book that has taught me more than any other book I can think of. It is a book I keep constantly referring to in thought. It is, in short, one mighty reference.
Interestingly enough for a book that recounts the evolution of life from us to its beginning, less than two years ago I have stated in this blog that evolution doesn’t interest me much. Well, since then a lot has happened, and through the reading of just a few books by Dawkins and Sagan my perception has changed quite significantly. If my choice of best films can be predicted through genre, then it seems obvious that my choice of books can be predicted through author, namely Richard Dawkins. The guy really has the ability to write marvelous and simple explanations of his accounts. I wouldn't put money against Dawkins getting his third R-Ward next year.

Best on TV:
This year we have watched plenty of TV material. When you don't have much time to watch a feature length film, TV programs are much more suitable and flexible. Let's be frank: most TV stuff does not require much gray cell effort to digest, either. Interestingly, though, hardly any of our TV watching was done off the air; the days in which someone determined our schedule according to some arbitrary money making algorithm seem to have gone by, reserved only for major football games.
Of the TV programs we have been watching, I think it would be safe for me to say that Family Guy was the most reliably entertaining series with some episodes being true knock outs (e.g., Blue Harvest).
However, being that this is awards night, the R-Ward for best TV goes to the most surprising and innovative program I have seen on TV this year. And that one was Alain de Botton's The Perfect Home, his follow-up TV documentary to his book The Architecture of Happiness. I have found the book disappointing but the documentary anything but; I never imagined myself being as intrigued as I was out of a program dealing with real estate. 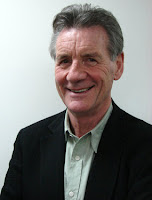 Lifetime Achievement R-Ward:
One guy that seems to have created quite a collection of travel adventure chronicles which never fail to entertain and to show us the world as it is/was is Michael Palin. Just like deBotton showed me how to properly deal with real estate, Palin repeatedly demonstrates how to do travel documentaries that really make you feel like you've been there.
Between Around the World in 80 Days, Pole to Pole, Sahara, Himalaya, and New Europe, the guy is quite prolific but not at the sacrifice of quality.
I found Around the World in 80 Days, Palin first travel effort, to be the most interesting of the lot. Shot towards the end of the eighties, it captures a world gone by but a world in which I grew up in. His glimpse on Chinese rush hour, featuring hordes of bikes virtually stampeding once another while Palin begs us to imagine what the world would be like if all these people had cars instead, is one of TV's most prophetic moments ever.
So the R-Ward goes very deservedly to Michael Palin. And I didn't even mention that he's the lumberjack.
Posted by Moshe Reuveni at 7/29/2008 08:31:00 pm No comments:
Email ThisBlogThis!Share to TwitterShare to FacebookShare to Pinterest
Labels: R-Wards
Newer Posts Older Posts Home
Subscribe to: Posts (Atom)