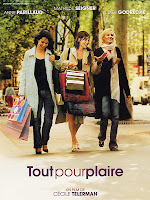 Lowdown: It's hard being a [close to] middle aged woman.
Review:
Having only recently watched The Last Kiss, an American film that gives relationships a good dissection and focuses on the early thirties age group, it was very interesting to watch another film that deals in similar issues from a bit of a different perspective. Different, because Thirty Five Something is a French film, and different because while Thirty Five Something deals with relationships quite a lot it's primary reason for existing is to give us an impression of just how hard contemporary circumstances make a modern woman's life; it's just that it does most of the demonstrating through relationships. In typical French film fashion, the film dissects the issue at hand by exposing us to the daily nitty gritty of women's life, rather than by focusing on some elaborate setup or trying to actively preach the viewer.
The plot follows three Parisian women in their mid thirties. One is a doctor with kids, married to a guy who thinks himself an artist and in the name of art doesn't do much to help around the with the running of the household. The second works for a marketing company and enjoys the pleasures of a horrible boss and a husband that seems much more attached to work than to her or her son. The third is single, yearning to find a mate, and as the film starts gets dumped and tries to contend with the ensuing hardships.
The rest of the film follows the three as they fight it out to survive and live the life they should be living. In a very American fashion, they do manage to solve their problems, but as with The Last Kiss the solutions are not perfect and require significant sacrifices. Interestingly enough, while the American made The Last Kiss offered French style explicit sex scenes, the French Thirty Five Something refrains from nudity in a very American style.
Still, the main point of the film is to do with the expectations people have of a modern day woman and the hardship they encounter in fulfilling those expectations: always having to look attractive, finding a guy who is decent enough (a task that grows harder as they grow older), managing career expectations, managing the family, and much more. It seems like the more educated and sophisticated the woman is, the more is expected of her, and thus - perversely - the harder life is for her.
Memorable scenes:
For the worst scene, there's the totally artificial scene when the evil boss, angry at the woman's victory, shuts the door with such anger the glass door breaks; that's corny.
For the best scene, there's the scene where one of the women is having sex but she's so consumed with the troubles of daily life that she keeps thinking of those and does the sex like an automaton.
For the scene I will remember the most, there's the scene early on when the three friends meet and walk about the street while fooling around (it's the scene that's in the attached photo). They mess around like kids, making me wonder what exactly were the director's instruction for the scene.
Overall: A solid, if overall forgettable, 3 out of 5 stars performer.
Posted by Moshe Reuveni at 5/12/2008 10:31:00 pm
Email ThisBlogThis!Share to TwitterShare to FacebookShare to Pinterest
Labels: Film