DVD: No Country for Old Men 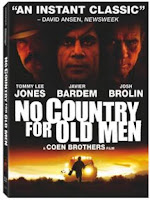 Lowdown: Three men fight out for a major money prize.
Review:
The Coen brothers have established a reputation mostly by creating films which mock the stupid people of southern USA (at least according to them). With No Country for Old Men they have created a thriller that is atypically low on humor (although humor is not fully absent) and uses the same stupidity to make a point - a point about the destructive qualities of the chase for money.
No Country follows three characters. The seemingly main one is Josh Brolin, a Texan welder who - while deer hunting - stumbles upon a drug deal gone wrong. In between all the bodies he finds a bag full of money, so he takes it home with him. Next we have the previously unfamiliar Javier Bardem who plays a psycho killer. Originally employed by the drug dealers to retrieve their money, he quickly disposes of them, everyone around him, and those that are sent to kill him as he hunts Brolin and the money. And last, we have Tommy Lee Jones, an old sheriff who dreams about the days when lawmen didn't have to carry arms as he follows the carnage left by the two other characters. Essentially, No Country is the heart pumping tale of Bardem chasing after Brolin.
No Country leaves you with this melancholic feeling. Lee Jones, who is there to represent you and I, gets tired of all the carnage around him that is the result of the Mammon idolization. He declares the country no longer fit for old men and retires; thus the simpletons of Texas serve to pass through an anti corruption message that would be much harder to communicate using a more complex environment.
There is some major high tension in the air while watching No Country. Fingernails get bitten, toes get tiptoed, and in general the tension is so tight you can cut it with a knife. The knife metaphor is very related to the film: No Country is extremely violent. It's not too graphic, but prepare yourself for some gruesome murders.
Tensions are so high that when the film concluded I was thinking something like “wow, now that’s one great film”. Then, however, I started thinking; and the more I think of No Country the less I think of it.
I feel like I was being cheated. For a start, the main catalyst in the film is a psychopath, so while you may as well argue that many politicians and other key people up the food chain are psychopaths (and a recent research I have read tends to support this call), it does feel rather unnatural; that is, if I am asked to conclude that the world around us is coming apart, I would prefer this conclusion to be based on sound facts as opposed to psycho babble.
Then there are the regular Coen bros tricks of manipulation. We watch the film tracking the events that transpire over the three main actors, but the feeling of “we know it all because we’re watching all three” soon shows itself to be just an illusion. You don’t really feel it while watching the film, it’s more of a thing you realize afterwards, but things you were not kept up to date about have a pivotal role in the way No Country’s plot untangles. I don’t want to give too much away, but I’ll just say we’re only exposed to the American view on events while the Mexican side remains mostly hidden. You can argue that not knowing everything there is to know is part and parcel of living but my problem is that I feel conned; the Coens make me feel like I know everything when in fact I don’t. As cinematic tricks go it’s a good artistic trick, but I see it as a cheap trick. Plus, as you will find out through a certain character’s demise, you don’t always get to see everything that happens to the main guys either.
Best scene: The psycho killer closes on Brolin’s motel using a bug stashed between the dollar bills. The slow process of pinpointing where the money is while leaving our hearts pounding with worry for Brolin’s immanent fate works incredibly well in the thrilling department.
Technical assessment: Like many other recently reviewed films, No Country opts for a high contrast look that robs details away and renders the picture rather unrealistic. The sound, however, is made to be more realistic than usual, which means that it’s mostly quiet but then downshifts strongly when the heart pounding moments arrive.
Overall: Immediately after watching No Country I wanted to give it 4.5 stars. The film’s deception, however, makes me want to give it 3.5 stars. It's not that I really mind being deceived; all films deceive us one way or another, otherwise the director would tell us the end right at the beginning and that would be it. I just feel the deception was there to hide relative shallowness.
I will therefore settle on 4 out of 5 stars, and add that regardless of its artistic qualities No Country is one mean thriller.
Posted by Moshe Reuveni at 5/05/2008 10:01:00 pm
Email ThisBlogThis!Share to TwitterShare to FacebookShare to Pinterest
Labels: Film

I think Chigurh is the main catalyst in the film for 3 good reasons:

-It's probably that way in the book. Yes, I know that a good book does not necessarily make a good film, but NCFOM is supposed to be a very faithful adaptation.

-In my opinion, if more of the focus was on Lewellyn or the sheriff, I (and a lot of people) would have had no idea what the hell was going on.

-He's the most interesting character.

I don't know anything about the book, but I fully agree that it's Mr Psycho that takes the lead here. Which is exactly why I have a bit of a problem with the film.

I think his prominence is a definite statement, but one of revulsion rather than approval.

I just think that using a psycho killer is a cheap trick. It's like showing you something unlikely and then saying it was just a dream. It's too easy a way to make a point.