DVD: I Am Legend 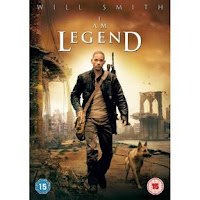 Oooof. Haven't seen a rating this low in a while. How did you feel about the previous filmed versions of this story (The Last Man On Earth and The Omega Man, respectively.)?

To be honest, it's been a while since I've last watched Omega Man etc (we're probably talking half life terms here).
What I can do is try and point at one key difference between those and Legend: Legend puts a lot of emphasis on the "how", as in how people drove themselves extinct, which is why I have a problem with the stupid way in which it portrays the Darkseekers.
Omega Man, on the other hand, did not attempt to address the how, or it least did not emphasize it much (well, at least as far as I remember; I could be completely wrong here). What Omega Man was aiming for was a reflection of the way people felt during the Cold War, the fear of the threatening stranger. It did it well and it effectively used the media to make its point.
Legend, on the other hand, is just a wishy-washy excuse to give us shots of a devastated New York and make us jump in our seats. Beyond the rather stupid "god has a plan for all of us" theme, I couldn't detect any sense in it.

See I believe your missing the whole point of the movie. You are correct about the movie missing crucial elements. The movie to me isn't about the whole Sci-Fi aspect or the disease at all. The movie is more about the human element, more or less answering the question: What would you do if you were put in Will Smith's situation. You really pick up on that when he goes and talks to the dumbies in the store and around town even though they are completely fake. To me the movie seemed to be based on how Will Smith(Robert Neville) copped with the lack of social interaction.

I agree there is a lot in what you're saying. However, it has been 4 months now since I have watched I Am Legend and what I mostly remember about it is it being a zombie film; if you were to wake me up in the middle of the night and ask me what I thought of the humane aspects of it, you would have to wait a long while for my answer.
Still, I am happy to hear that someone managed to find something positive in I Am Legend. I sure didn't.