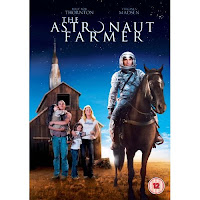 The message of the film is that if you try hard enough, if you really make an effort, it’s more important than any intelligence or talent.
You’d understand it better if you’d read more Scientific American articles.

BTW, do you remember Heinlein’s Farmer in the Sky?

I accept your criticism: too many of my recent posts are to do with Scientific American articles. The reason for that is simple: In a routine where my day is made of work, looking after Dylan, and then a couple of hours for myself/ourselves before going to bed stupidly tired, excitement is lacking. Sciam does fill the gap, to one extent or another: I read it regularly over lunch at work (mainly because it's hard to keep a book open while eating but it's easy to do the same with a magazine). Thus Sciam is the closest I get to out-worldly experiences.

As for Astro Farmer.
I agree with your point about the film's message. I think I even said the same thing, albeit using different wording. There are a couple of "buts", though:
1. There is a significant non-conformism element to the film (as demonstrated by the scene I picked as best).
2. The notion that enough effort can take you out of this world and all it takes is enough trying is wishful thinking propaganda. As I have said, a Sudanese refugee will never become an astronaut no matter how hard he/she tries; it's to do with their circumstances. And as I have already said, I don't know anyone who can go out to space on their own, no matter how much effort they put into it; I suspect that is exactly why Astro Farmer never delved into the mechanics of building the rocket and its guiding systems and solved the flying part by making the hero a fighter pilot.

Finally, I don't recall the Heinlein book. What is it called in Hebrew?

something like "towards the 21st century" (''El HaMe'a Ha-21'').
A teenager and his family move to Jupiter’s moon Ganymede to become farmers.

There's a ring of familiarity to it, but just a simple ring (say, one of the Dwarf Lords' seven).