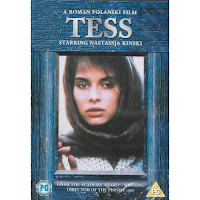 Lowdown: A woman finds herself a victim of society in 19th century England.
Review:
I won’t deny Roman Polanski is one of those directors I look up to, and Tess is yet another reason for that. While long and tedious, Tess is still a statement in the art of moviemaking.
Set in the second half of a very class oriented 19th century England, Tess follows the story of the life of one woman who happens to be called Tess (Nastassja Kinski). She was born to a low class family with a useless father who is busier complaining than taking care of his family. As the film starts, the local priest tells the father that he is actually a descendant of a famous noble family, and the father immediately tries to make the most of this news.
The father sends his daughter Tess to pay a visit to a rich branch of the noble family in an attempt to get some of the crumbs off their table. This turns out to be a tragic mistake for Tess, who ends up being caught in the middle of having to support her family while being the subject of continuous sexual harassments from the leading son of the rich, and rather eccentric, family. Along the way she also learns that the rich family has actually bought their title, which meant they were not true relatives.
Her affair with the rich family ends abruptly with tragic consequences, and Tess attempts to start her life again hard working on a dairy farm in order to continue supporting her family. There she meets a seemingly charming and smart guy called Angel, and they both fall for one another (in that incredibly shallow way that some movies portray, where people fall in love with one another just by gazing at one another from afar; that said, the social limitations of the time and place probably meant options were rather limited). Will the couple manage to get along while Tess carries the burden of her past experience with the rich family?
As already stated, Tess the film is long, slow and quite tedious to watch. However, it is this tediousness that makes it rather special because of the way the story is told: it starts with a tragic mistake, ends with redemption, and in between the mechanics of it works by duplication. Most key events seem to be happening twice, with the differing results of the deja vus serving as the catalyst that propels the film forward. The technique also serves to garnish the film with a thick layer of fatalism, which is key to the story told here even if I, personally, consider fatalism to be a rather foolish notion.
Polanski dedicates the film to his murdered wife, Sharon Tate, and you can sort of see why Tess’ tragic story found its appeal with the mourning husband. Tess also fires lots of poisoned arrows towards religion and its institutions, which are often to blame for the calamities that fall on Tess the character; again, these can be considered as signs for Polanski’s frustration with the incapable hands of the authorities as they handled the events in his personal life. And last, Kinski serves as a sign for Polanski’s personal and continued affection to the young and good looking.
Best scene: To be honest, I could not identify any particular standout scene in Tess. The ending scene set in Stonehenge is beautifully done, but then again that is not that much of a challenge given the setting.
The scene I find most memorable is the scene in which we see Tess for the first time after we previously saw her being raped by her rich sort-of relative. We see her working on a field of grain, and then the workers stop for a break. Without any warning, Kinski (as in, Tess) reveals a breast, picks up a baby that was out of the frame until that second, and starts breastfeeding. It is not like the nudity shocks you or anything; I have to say I’m all for nudity, especially when it’s a natural part of the events taking place in the film. It’s just that the scene represents the rather shocking way in which Polanski conveys the news of what happened after the rape to the viewer. In one simple move he tells us that Tess got pregnant, left the rich family, and is now laboring hard to support her recently extended family. Thus Polanski quickly covers the events of a year or so, perhaps more, in a manner that is atypical to the rest of the film (which is quite slow). It’s those touches that make Polanski a great director in my book.
Picture quality: Hideous. Plenty of analog noise, and even more digital artifacts of the worst types that are really distracting and annoying.
Sound quality: Even worse than the picture. The sound is bright and harsh and way too artificial to pass by without severe distraction. Dialog is even worse: it’s very unintelligible, and the lack of subtitles on the DVD meant repeated rewinds and tons of “what did this guy just say” questions that hurt the flow of the film.
Overall: There are signs of brilliance but Tess is also tedious and is severely hampered by a very poor DVD production. 3 out of 5 stars.
Posted by Moshe Reuveni at 2/06/2008 06:01:00 pm
Email ThisBlogThis!Share to TwitterShare to FacebookShare to Pinterest
Labels: Film