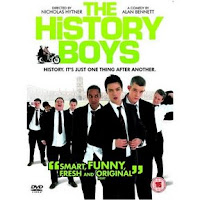 Lowdown: A group of high school graduates make a special effort to get into prestigious universities.
Review:
History Boys’ main contribution to my film watching experience is in demonstrating the differences between expectations and actuals. I looked forward to watching this film, described as a comedy about some smart kids from middle of nowhere England that make a special studying effort in order to get to either Oxford or Cambridge some time during the middle of the eighties. In order to help make their quest successful, they were arranged to have a new hotshot teacher to replace their existing one, and the friction resulting from this change was suppose to supply fuel for the movie to run on.
That was the expectation. The reality, however, was significantly different. True, the plotline is very much as described above, but the execution is anything but. Instead of being a drama following the rigorous efforts the kids have to make in order to combat the insurmountable odds facing a child from an average background in an average school that wants to get high up the status chain, History Boys is a collection of scenes pitting the students against themselves or against an adult and having the students talk Smarty. By Smarty I don’t mean chocolate beans, I mean talking in pompous English while quoting from all sorts of supposedly famous literature sources but without making much sense; that is, the main purpose of the talk is to demonstrate how smart the talker is rather than to convey a specific message, and this is achieved by using such sophisticated a language that the listener stands no chance comprehending it (probably because the process of making the language sophisticated meant most of the contents had to be sacrificed).
That is pretty much all there is to the film. Sure, there is some tension between characters, students and teachers, most of it revolving around the children’s evolving sexuality. And there is some slight discussion about studying for the purpose of enlightenment rather than studying for the purpose of passing a test. There is also a passing remark about the futility of going to Oxbridge when eventually the graduate just ends up being yet another lawyer or something similar instead of being someone with an impact, like, say, a teacher. History Boys does have all those things, but they’ve all drowned in a sea of bullshit.
If anything, History Boys feels like it needs to be a play rather than a film. Who knows, maybe it is? Although I wouldn’t want to see it, a play would provide better grounds for people to just talk bullshit without really doing much, if only because in the theater you don’t expect much more than dialog.
I am also unable to figure out what it was that History Boys gained or was trying to gain by having it take place during the eighties. Unless there was something uniquely British about English public schools during the eighties, the film could have worked just as well (or rather, just as bad) in any other time period.
Worst scenes: Any scene in which any character starts quoting some famous poemist, which qualifies most of the film for the title.
Picture quality: Pretty bad with analog noise by the ton and missing picture detail. I have seen better on VHS.
Sound quality: Mostly mono through the center channel.
Overall: Tedious and boring, 1 out of 5 stars.
Posted by Moshe Reuveni at 1/08/2008 10:22:00 pm
Email ThisBlogThis!Share to TwitterShare to FacebookShare to Pinterest
Labels: Film