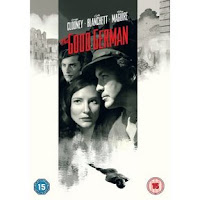 Lowdown: Take 2 on forties’ films.
Picture quality: In a very unorthodox way, The Good German sports a black and white picture and an old fashioned 4:3 aspect ratio. The picture is of a very high contrast, making any discussion on picture quality rather moot.
Even special effects are made to appear particularly bad, so that when you see the characters driving in a car you know that they’re really sitting in a studio and it’s just a film behind them that shows the passing scenery.
Review:
It’s fairly unorthodox of me to start a review with a technical discussion about the film’s picture quality, but that attitude is entirely justified in the case of The Good German. From start to finish, the film is a tribute to the black & white films of yonder, most notably Casablanca, with special emphasis on film noir. The Good German is a modern film that goes out of its way to appear like a film from the past; it even deals with matters from the same period it tries to mimic.
The plot takes place in Berlin soon after the Germans were beaten but before the Japanese surrendered. George Clooney is an army reporter arriving to cover a meeting between the leaders of the UK, USA and USSR in which the spoils of the war would be allocated. The army assigns Tobey Maguire to be his designated driver, and quickly enough we learn that Tobey is a corrupt person who wants to make quick money out of the war at the expense of the German population’s misery, represented by his prostitute girlfriend Cate Blanchett (who does an excellent job in her role, as usual). This, however, is just the very beginning, and soon enough everything develops further and further and The Good German becomes film noir with Clooney as the tragic hero. He finds himself surrounded by human filth and state run filth: Everything is someone’s plot to advance their own personal aims, and nothing is sacred in order to achieve that: even the prosecutors who set out to identify the nasty Nazis are polluted. There is no idealism left in the world.
The true evil is at the state level, though, and in the fight between the USA and the USSR for world domination everything is kosher. The two are trying to make the most out of the evil committed by the Germans as they go about convincing themselves that atrocities are not too bad when they’re committed in the name of good. I suspect director Steven Soderbergh of Ocean series fame is trying to make a statement there about what the USA is currently doing to the world with its self declared war of good on evil, but ultimately this entire point takes second fiddle to the film’s overly dominative style.
Memorable scene: A scene made to look and feel exactly like one of the more famous scenes from Casablanca, with a few slight (yet important) differences. More details would spoil it for you, but the climatic similarities between the two films must have been at the forefront of The Good German makers’ minds.
Sound quality: As can be expected after reading the rest of the review, normal sound doesn’t play much of a role in this film. What does play a role is the music, which sounds bombastic and dramatic, the way it did back then in those old newsreels.
Overall: I don't care much for the style, but I’m a sucker for good film noir and The Good German definitely rocks in that department. 3 out of 5 stars.
Posted by Moshe Reuveni at 1/10/2008 10:31:00 pm
Email ThisBlogThis!Share to TwitterShare to FacebookShare to Pinterest
Labels: Film