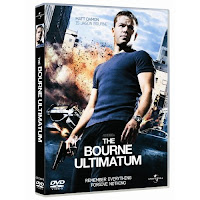 Lowdown: A gripping version of a serious James Bond like adventure.
Review:
I'll start by making it clear: I am no big fan of the Bourne series. I liked the first one even if I thought it was nothing special; the second one made me seasick. Now that we have a third episode, the answer to the question of "what is this third one like" is probably "an extreme version of the second".
Jason Bourne, the ultimate killing machine, continues his ongoing quest to find more about himself. The main difference is that this time we actually end up with an answer, which at least means that episode four will have to explore some alternative themes (either that or it will to come up with something special up its sleeve). As with the previous episodes, we have ourselves an international James Bond like serious action adventure with Bourne being tracked by professional killers as he fights with a CIA that thinks he's out to get them while he's only trying to understand who he is. As already said, the difference is that this time the action is more extreme and more realistic in the sense that it takes place in famous public places and in a manner we can all relate to: a shootout in London's Waterloo station or a gunfight in New York's Port Authority, for example. In the similar James Bond series the locations are there to add an aura of exoticness; here the locations are there to add an aura of authenticity.
Authenticity is highly required for this Bourne adventure, because with its super high-tech aroma (mainly through the facilities available to the CIA) one can easily think something along the lines of "oh, this is such bullshit". Thing is, a lot of it isn't. For example, the film argues that the CIA can tap any phone call it wants and can actually flag those where certain words are said; sounds too bad to be true, but it is true. I doubt it's as easy as the film portrays it to be, though, which leads me to say that despite its hard efforts towards authenticity Bourne Ultimatum is still way up high in the bullshit factor. You get Bourne surviving explosions and falls that would kill or cripple most people most of the time, but you also get some technological bullshit. For example, a CIA manager asks to have the names of all CIA operatives who had their mobile phones shut during a particular time on a particular date, and within less than 5 seconds they have names flickering on the screen in front of them. Obviously, the CIA has a database query tool that works by telepathy, and that's ignoring the feat of having such a database available in the first place!
By far the most annoying thing about Episode 3 is its style. Shot entirely hand held with high zoom levels and fast editing, this is not a film to watch on a big screen without puke bags ready. Personally, I just hate this style; you can't understand what is taking place until the action ends and the camera finally retreats a bit to allow you to figure things out.
Still, when the dust settles I have to say that Bourne Ultimatum is a very gripping film, even if it is quite forgettable. You sit there and you bite your nails and you want to see how he's going to get himself "out of this situation".
There is also some substance to the film: Ultimately, Bourne Ultimatum is about having an open, thinking mind. The baddies in the film are people just like Bourne (read: just like us) who are doing bad things not because they're bad but because someone who is genuinely bad has told them to do so and they fail to question that. The film goes further by putting the CIA as the film's baddies, which works well in the current contexts of CIA abductions and of Abu Ghraib prison guards going off the rails. They, too, failed to question, just like most Nazis before them.
Best scene: There's not much to Bourne Ultimatum other than the action scenes, and in there it's really hard to choose a winner because they're all good. I like those set in an international city, like London, Turin, Tangier, or New York. If forced to choose I'd pick Tangier for being the most exotic and for reminding me of a chase scene in Raiders of the Lost Ark.
Picture quality: Good, but you don't notice it because you're busy barfing.
Sound quality: Very aggressive, quite good. My six months old was certainly gripped by it.
Overall: It's thrilling but it's annoying, so it scores only 3 out of 5 stars.
Posted by Moshe Reuveni at 1/05/2008 06:29:00 pm
Email ThisBlogThis!Share to TwitterShare to FacebookShare to Pinterest
Labels: Film