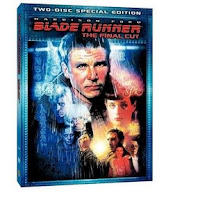 I disagree. HUGE difference. They fixed the horrible stunt double footage for Zhora's death scene, something I found to be a terribly distracting blight on the face of a great movie.

If this is what made the difference for you then good on you; I never noticed it. I guess we look at different things when we watch the same thing.

I see Dylan likes it too (although it wasn't the new version, right?).

BTW, I like the voice-overs. I may be the only person on Earth who does (I heard that Ford tried to make them terrible on purpose), but I still do. So you can guess which version I like best.

The version Dylan is busy chewing in the photos is the 4 disc ultimate edition of BR. It is, however, the American version we won from Widescreen Review (just a couple of days after we rented the PAL edition and reviewed it here). The cover of the American version is like the cover of the old Director's Cut (which we also happen to have).
Anyway, the 4 discs include the new version on one disk, and all the older versions on another - including two versions of the theatrical release and the Director's Cut. Don't ask me what the two theatrical versions differ at [yet].
The two remaining disks contain supplementals, and in there they talk of all the problems Blade Runner is famous for, including everyone's reluctance with the voice overs that were forced by the producers. You're right about Ford's attitude.
As for preferences, I prefer the Directors Cut / Final Cut. I think the unicorn adds an extra twist that makes me think even more, and the lack of the voice over helps me exercise my thoughts. I don't think the voice overs bothered me before and I wonder whether I would have been able to understand the film to the level I do now without them. That said, the ending of the theatrical version is extremely contrived and out of character with the rest of the film; it doesn't feel right. It's like ending a story with "and he woke up and all was well". It's cheating, and it can't compete with Adama being there but letting them go.

what are the other movies in the best ever list? where is my favorite (if I was allowed to have one) in the list (pulp fiction)?
IMDB put it on the 5th place where your movie (if you have one) is on the 100 place

I refuse to answer such questions because I don't really think there is such as thing as "best ever". It depends on circumstances.
As I said, when pressed, Blade Runner is what my answer usually is. Lord of the Rings is also often quoted, and if you really want to try hard I think that Shawshank Redemption is a very good film.
As for Pulp Fiction, I think it's a shit film that copies stuff from others and tries to look cool doing so. I understand people who enjoy it; I enjoy it too. But I don't think that violence and thrash talk make a movie great.