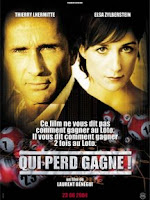 Lowdown: We all want to believe in fairy tales.
Review:
As a brief look at my recent reviews immediately demonstrates, the new crop of Hollywood made films we have been recently watching has been greatly disappointing to say the least. No inspiration, no originality, no value for the time spent watching the film other than mild numbing of the brain. In an attempt to remedy that we tried ourselves that good old medicine called "a foreign film" - the French speaking Belgium production called Loser Takes All! - and to our great satisfaction found ourselves a temporary cure. Loser Takes All!, like many other good French films, offers a different and less conventional look on things, thus rendering it a pleasant surprise to the eye. Add to that the mandatory seemingly redundant nudity and sex scenes you always get in French cinema, and you have yourself quite a good film to review.
The basic premises of the film is the discussion on how we, people, have this wild desire to believe in fairy tales. The best example I can think of is the popularity of religion, and I recall a friend telling me that one of the reasons she's a believer is that one night, while afraid of coming home to a dark train station, she was relieved to find some old school friends that walked her home; what are the chances of that happening without a good dose of divine intervention? Well, people tend to forget that if you through a dice, the chance of getting a 6 is the same as getting a 1. People neglect to notice that unlikely events happen all the time for the simple fact that so many things happen all the time: in a large enough population there are even people that win the lottery - almost on a weekly basis! On one hand people don't seem to notice that the biggest luck of all is being alive in the first place, while on the other people's brains are always on the lookout to try and find patterns where they don't necessarily exist. Hence your average fairy tale.
With that long introduction in mind, let's get to the film. A self proclaimed scientist wins the French lottery and organizes a press conference in which he declares that the win was no coincidence; he is actually able to forecast the winning numbers based on formulas he has devised after studying the results of tens of thousands previous draws. Things become truly sensational when on the next draw the same guy wins the lottery again. Is that possible? Do fairy tales really exist?
Not according to the leading female lead, the leader of a James Bond MI6 type organization in charge of making sure that all's healthy in the world of French gambling. And in order to investigate what really took place she joins hands with a lover of hers who happens to be an addicted gambler, unwanted by all known casinos after he won much more than he should.
And thus we have ourselves a mystery story at hand that unravels like your classic detective story. With excellent pacing, solid acting, and the thrill of the ride I was fully enjoying myself but also constantly worried that the film will disappoint and provide a poor ending - something along the lines of a mystical explanation. But it doesn't - it's all nicely and elegantly solved to make a nice coherent statement.
Overall: An exciting and thoughtful watch. 4 out of 5 stars.
Posted by Moshe Reuveni at 12/11/2007 09:52:00 pm
Email ThisBlogThis!Share to TwitterShare to FacebookShare to Pinterest
Labels: Film