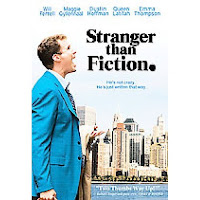 Lowdown: A guy discovers his fate is predetermined by a writer.
Review:
The wait took ages but it was worth it. After long months in the waiting I finally stumbled upon a good American film! Hooray! It's quite a thing to stumble upon a film that takes the good things from American cinema - the good production values, the easy going lightness of things - and actually adds some wisdom to the mix. Stranger Than Fiction is the film at hand.
Will Ferrell stars as an IRS agent who is really good at his work and who epitomizes everything one would imagine about IRS agents: everything is calculated and no stray actions is allowed. Ferrell keeps on hearing a narrator's voice (Emma Thompson), dictating the exact things that are about to happen to him and his private thoughts. Thing is, it's only Ferrell that is hearing these voices; no one else does. We quickly learn that Thompson is a famous writer who is going through a blockage period while trying to finish her book, a book about an IRS agent that just happens to have the same name as Ferrell's character. Thing is, in all of Thompson's books the hero ends up dying tragically, and when Ferrell learns that he is about to die he looks to change his fate. In the process he also falls in love with Maggie Gyllenhaal, who portrays a bakery owner that refuses to pay her taxes as a protest for all the wrong things the government does. Ferrell also seeks assistance for as extraordinary condition from Dustin Hoffman, who plays a literature professor.
There is much to take from Stranger Than Fiction, but essentially it is a story about taking control over one's life and learning to appreciate life for those small things that make it worthwhile. Essentially, the film says that we're all going to die, and while we're all aware of that, we shouldn't let that break us down; we should enjoy what we have instead. The beauty of the film is the way it makes its point: The wonderful performances by Gyllenhaal and Hoffman, the casting of Ferrell which hits the spot, the contradictions between the characters (for example, Thompson on a death wish like mission to finish her book vs. the calculated Ferrell), and finally - the lovely way in which the film is woven together.
Best scene: Ferrell plays the guitar in Gyllenhaal's living room while she is in the kitchen cooking. The camera is positioned so we see both of them simultaneously, each at their side of the screen, and the result is an exemplary act of good direction work and good acting.
Picture quality: Noisy and lacking in detail.
Sound quality: Overall way too subtle for its own good, although there is some smart usage of sound at key moments.
Overall: We've seen better films but the package, overall, is very charming. I'm going to be generous and give Stranger 4.5 out of 5 stars.
Posted by Moshe Reuveni at 12/30/2007 06:14:00 pm
Email ThisBlogThis!Share to TwitterShare to FacebookShare to Pinterest
Labels: Film