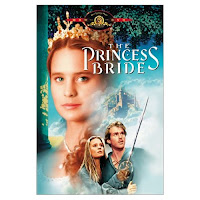 Lowdown: My name is not Inigo Montoya.
Personal history:
No, I'm not about to review The Princess Bride. I've seen it too many times before to start with, and everyone has seen it and has an opinion about it to continue with. Instead I'll just reminisce...
I was lucky enough to watch Princess Bride before it became a household name and before everyone started repeating the lines (as in, the entire theater going "my name is Inigo Montoya..." every time the matching line comes up). I was 16, and I went to see it during its first week on air with my high school friend Moshe (we used to sit next to one another in class, which really annoyed some teachers). We didn't know much about the film: we knew it was a legend story type thing, I was into reading fantasy books big time at the time, and Moshe heard that Mark Knopfler wrote the soundtrack. It was enough for us to give it a go; at the time I couldn't care less that the director was Rob Reiner, aka Meat Head from All in the Family. To be honest, little did I know that this is the guy who is going to direct When Harry Met Sally or Misery a few years later.
Anyway, we obviously liked the film, even if I still remember we were badly disappointed with the cinema sound and its rendering of the soundtrack. Only later did we become aware of the cult status this film has earnt itself.
Now, is this status justified? I would say so. True, the concept of "true love" is, in my opinion, quite a stupid idea that has probably served to ruin many a relationship over the years through false expectations. But to be fair with the film, it does mock quite a lot of other ideals that stand in its path, such as fairness and happy endings (yet it still provides them all). Go figure...
What I do know is that the script is one of a kind and the directing is superb. And I even like the awkward looking special effects; at least they're not CGI!
Favorite scene: The sword fight between Inigo Montoya and the dreaded Roberts sets the scene pretty well for the rest of the film.
Picture quality: I own the first generation DVD in NTSC. Other than being NTSC, which is always a bad starting point, it is also not anamorphic and displays tons of analog noise. In short, this one is as bad as a DVD can ever be.
Sound quality: Average for the time the film was made, which means it's pretty bad.
Overall: Films don't come more 5 stars out of 5 than this one.
Posted by Moshe Reuveni at 12/18/2007 10:07:00 pm
Email ThisBlogThis!Share to TwitterShare to FacebookShare to Pinterest
Labels: Film