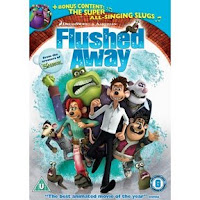 Lowdown: The team behind Wallace & Gromit takes the wrong turn.
Review:
The very British team that gave us Wallace & Gromit is back with another animal themed film, but this time there's a catch: instead of live action, they went the way of the everyone else and reverted to computer animation. What started as a unique move by Pixar with its Toy Story has turned into an infestation...
The real question, however, is not what technology was used to create the film but rather whether the film is any good. And the answer there is that it seems that the Wallace & Gromit gang not only lost their clay touch but also lost the plot. Not that Flushed Away is a bad film; it's just that it's nothing special, and ultimately quite forgettable. It's one of too many.
Hugh Jackman voices a mouse living as a pet in Kensington, one of London's richer areas. While his masters are away on leave and he's on his own playing with his rich mouse's toys, a sewer malfunction causes a fellow mouse to show up. That new mouse is tough and rough, and he flushes Jackman down the toilet. Jackman finds himself in an underground rodent city, but instead of being happy with having proper company he wants to go back home. He recruits the services of Kate Winslet, a mouse rogue captain of a boat, and together they make ends meet while fighting off an evil toad that wants to destroy all mice (Ian McKellen).
Thing is, there's nothing in Flushed Away we haven't seen before. The messages of love and friendship and family etc being more important than cash and property has been chewed to death in similar kids animation films, and the jokes that use contemporary culture as their starting point are just not funny anymore when all the films use the same type of humor. There is one truly funny joke in Flushed Away, when the hero scares a slug which runs away but very slowly, but that joke is repeated so many times (again, again, again, again, and again, and again) that you become annoyed whenever you notice the hint of a slug.
So on the positive side we have a good cast and some nice British character (including the obligatory jokes about the stupid Americans). But that's it.
Best joke: England reaches the World Cup finals. To the film's credit, however, the makers make it clear towards the end that they know such an eventuality is as likely as winning the lottery without filling a lottery form.
Picture quality: Quite good.
Sound quality: It's all there, all the ingredients that should make a film sound good. But it's just uninspiring.
Overall: At the risk of repeating myself, an uninspiring 2.5 stars out of 5.
Posted by Moshe Reuveni at 12/19/2007 09:13:00 pm
Email ThisBlogThis!Share to TwitterShare to FacebookShare to Pinterest
Labels: Film