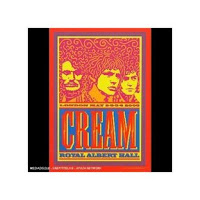 Lowdown: Creme de la Cream.
Review:
It is not of my habit to review music in this blog, mainly because I do not feel I have the capacity to quantify and analyze why one piece of music is better than another. However, with all due respect, exceptions have to be made for the exceptional, and Cream's recent performance at the Albert Hall is one of those exceptional exceptions.
I'll start with the bottom line: This performance from 2005 of this band that last said goodbye back in 1968 is, in my view, much better than what things were originally like. The performance is just smashing, and the seemingly geriatric band proves that it takes more than age to take back such quality. Instead, the quality has improved like well matured wine. So, for the record, I will say now that the performanc includes all of Cream's hits, plus some interesting variations on familiar songs.
The thing that has always been unique about Cream is the musical talent in the band's stores. Sure, everyone knows Eric Clapton to be a top notch guitarist, but his fellow band members are just as world class if not more: Ginger Baker on drums can only be rivaled, in my view, by Led Zeppelin's late John Bonham; and Jack Bruce on bass cannot be rivaled by anyone I am familiar with. And it shows: The trio, using nothing more than a set of drums, one bass guitar, and one electric guitar manages to fill up Albert Hall so well you think there's an entire orchestra there. The effect is nothing short of amazing!
A lot of the impact of this performance seems to come from the band members obviously having a hell of a time themselves. Through alternate versions of the same songs (available as DVD supplementals), it is clear for all to see just how much improvisation there is in the performance and just how well synced the trio is that they can so smoothly interact with each other's gigs.
Cream was always labeled a super group. This performance proves why.
Best scene: Through repeated viewing, I think it is safe to say that Cream has established itself as Dylan's (my four and a half month old baby son) favorite band. Judging by Dylan's reaction, his favorite bits are Ginger Baker drum solo and his performance in Sunshine of Your Love. The light effects, a relic of the old sixties past, add to the attraction.
Picture quality: Quite good. In an attempt to look modern the camera zooms in and out of the performers while adding some artificial shakes, which is a bit annoying.
Sound quality: We're talking audiophile quality here. Smashing sound re-mastering for a DVD! One can feel exactly where each of the performers and when Baker drums across his set you can feel exactly where he strikes each time.
Overall: Poetry in motion, even if the lyrics are way too psychedelic. 5 out of 5 stars.
Posted by Moshe Reuveni at 12/02/2007 10:16:00 pm
Email ThisBlogThis!Share to TwitterShare to FacebookShare to Pinterest
Labels: Music