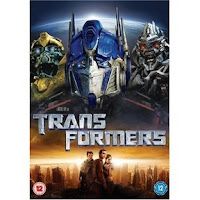 Lowdown: You wouldn’t want this film to meet either of your eyes.
Review:
At the risk of sounding childish I openly proclaim myself to be a fan of the Transformers animation series (at least the original one). Yes, I know, a recent re-watch has made it clear the series I liked during high school did not survive the test of time well even if I still know the title song by heart; but still, I could not hold myself from holding my hope up high when I’ve heard of Transformers the movie coming out. Initial doubts crept in when I heard it would be a Michael Bay film; one doesn’t want another Pearl Harbor. Still, Bay did some nice stuff, too: I quite like The Rock, and even The Island was pretty entertaining.
All that is to say that now, having watched Transformers the film, I can say that I was greatly disappointed. So much potential, so bad a delivery!
Failure, in my opinion, is the result of two factors: character development and special effects. Allow me to explain…
Unlike the good old animation series, the film focuses on the humans as the main characters with the robots being mostly called into action for the action sequences. And so we have ourselves a kid whose father buys him his first car. It looks like a total lemon, but guess what – it’s actually an Autobot transformer! Meantime, in some remote desert, US forces find themselves under attack by Decipticon transformers! With one unlikely event leading to another, things all come down to the kid with the car (who finds himself a good looking girl) being the focal point of the fight. The point I am trying to make here is that none of the transformer characters, be it the good Autobots or the evil Decipticons, gets developed into anything close to a round character; it’s just “we’re good” and “they’re evil” type thing. Second, none of the human characters is worth a fuss; they’re all as interesting as yesterday’s newspaper, topped by the hero’s girl whose idea of portraying depth is exposing us to her way too white set of teeth.
Fine, I hear you say, no one watches a film like Transformers for character development; people watch it for the action sequences. I agree, but then again those action sequences are just as annoying as the one dimensional female leads: All are glaringly CGI, and all are shot in this very annoying manner of fast sweeps and quick editing that make it next to impossible if not impossible to tell what’s going on. Pretty tasteless, I would say.
Add plenty of plug-ins (the film feels like an elongated eBay commercial), and you truly wonder what characters such as John Voight or John Turturro are doing there; or what is one Stephen Spielberg doing there as an executive producer.
Best scenes: I would say the scenes with Turturro shine as the best ones here, but that is only because the rest of the film is so bad. He does what he did in Big Lebowski: provide a short appearance as the comic relief.
Picture quality: Shot in high contrast stock, detail is lacking on this one even if the transfer to DVD seems to have been well made.
Sound quality: As expected from such a high caliber stunt, quite aggressively good.
Overall: A mildly entertaining yet totally forgettable 2 out of 5 stars.
Posted by Moshe Reuveni at 11/09/2007 08:50:00 pm
Email ThisBlogThis!Share to TwitterShare to FacebookShare to Pinterest
Labels: Film