DVD: Pirates of the Caribbean 3 - At World's End 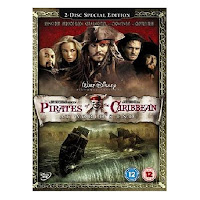 Lowdown: Now where did those 3 hours of my life disappear to?
Review:
We never expected much out of the third installment of the Pirates of the Caribbean 3. It was a Friday night, we wanted a light film that would be fun to watch but won't challenge our intellects too much, and most of all we were curious to see how that series ends. Not that we were terribly anxious or anything, given that the second installment was as forgettable as, but just - you know - wanted to see how ends meet.
Now I may have been able to tell you what PotC3 is about and what the plot is like but I can't, really. Not because I'm neglecting my duties as a would be film reviewer, but simply because there is none to talk about. More than its two predecessors, PotC3 is a collection of meaningless scenes that don't make much sense. It starts from the opening scene that shows rows of people getting hanged for no particular reason and moves on all through the rest of the film. Whatever progression the plot has is through the invention of new things that have mysteriously eluded the previous two films in the series, such as the introduction of a sea goddess.
Plot is not the only thing that is missing. Characterization is missing, too; the film relies on the characters "established" in previous episodes and doesn't bother spending even 1 cent on character development.
That's fine, I hear you say; the Pirates series is not about plot or characters, it's about the roller coaster action scenes. Not so fine, I answer back: the action scenes in this third installment are predictable, relatively rare, rely on CGI way too much, and to be frank - they're quite boring. Instead, most of the film is spent in meaningless dialog that doesn't really make sense but is full of pirate cliches of the type you would hear from the one legged character in The Simpsons.
When all of this ordeal spreads over close to three hours, the result is simply one of the most torturous movie experiences I have ever had.
Best scene: The closing credits, mainly because they signaled the end of the film. We thought that would never come! They also answered the most interesting question I had about the film, which was whether it was indeed Chow Yun-Fat that took part in the early part of the film.
Picture quality: Good, but should have been better. Too much noise.
Sound quality: OK, but nothing offering none of the qualities an action film with this kind of a budget should.
Overall: A complete waste of time, a film that has absolutely nothing to offer. 0 out of 5 stars.
Posted by Moshe Reuveni at 11/25/2007 11:50:00 am
Email ThisBlogThis!Share to TwitterShare to FacebookShare to Pinterest
Labels: Film

I don't know if I'd go as low as 0, but I thought it was pretty bad. at least it had an ending, which was more than you could say for part II.

The definition of a 0 star film is rather subjective. Mathematically, it would mean there was nothing there, which means you can never really rate a film as a "0".
That said, ending or no ending, we felt there was a total breakdown to episode 3 here. We were bored out of our minds!