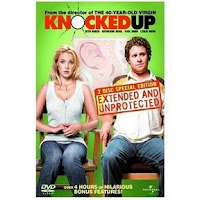 Lowdown: An almost documentary about an unwanted pregnancy.
Review:
40 Year Old Virgin was the last film we've watched before I started this blog. I liked it and thought it was funny enough to merit 4 out of 5 stars. Now the team behind Virgin has produced a film that is also heavy on puberty humor and that is also supposed to be full of seemingly proper morales despite the puberty humor: It's called Knocked Up, and despite its similarities with Virgin it is also very different. Unlike Virgin, Knocked Up serves almost as a documentary, or pretty much the closest thing that could still pass for both a comedy and a documentary.
The story is simple to the point that the hard to swallow bits of the plot are almost indistinguishable. On one hand we have an incompetent guy who will never score, smokes illegal substances all day, and with his group of incompetent guys dreams up on creating their own porn website but doesn't really do anything about it. On the other hand we have a good looking chick who is also smart (at least by Hollywood standards, where a good looking chick is never allowed to be an intellectual, god forbid) and works on TV and is just about to get her chance to go on screen. She's also living with her older sister and the sister's family, which doesn't really make sense. The two meet together, and while drunk they go for it; an accident happens, and whoops - the girl goes pregnant.
There is actually some hard science involved here, you know. Research has shown that women look for sex when they are at their fertile peak of the month; however, the research also shows that they are looking for guys with specific signs of strong genes. Anyway, this is my way to say that Knocked Up is a film of two halves, roughly, and as of the point that we learn about the pregnancy the film turns from a comedy that works mostly through an American Pie type of "sophisticated" jokes into a documentary showing us both the physical and the emotional changes that the couple by force goes through, pretty much up until the birth.
As someone who, at this particular time, is very versed in the procedures of pregnancy and giving birth, I can attest that although often inaccurate Knocked Up is as accurate as I have seen in an American mainstream production. Yes, people who have no idea what takes place during that time of your life can learn a thing or two there; thing is, when the focus of the film turns to the intricacies of pregnancy, the film stops being an effective comedy and turns into this Friends like drama - foolish and not very funny. At about two hours long, this can become a bit of a chore.
Best scenes: There were no jokes that really knocked me up. What I did like is how the guys were always portrayed doing drugs. While I think a world without drugs would be a better world, I am against the hypocritical view of some that pretend not to see that everyone is using drugs. John Howard included.
Picture quality: Your typical let's not make an effort DVD, showing transfer issues even on the much less than HDTV capable DVD format.
Sound quality: There's no need to power more than your center channel with this one.
Overall: An educational 3 out of 5 stars.
Posted by Moshe Reuveni at 11/20/2007 11:27:00 pm
Email ThisBlogThis!Share to TwitterShare to FacebookShare to Pinterest
Labels: Film