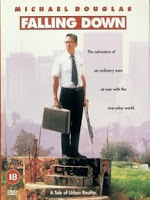 Lowdown: A wakeup call to society.
Review:
For a film as good as Falling Down, I am ashamed to say that prior to now I have only seen it once before from start to finish. That was on Israeli cable, not the best way ever for watching films. It still had its impact, being one of the sources of inspiration behind my main blog's name.
In a similar fashion to the recently reviewed The Good the Bad and the Ugly and Reservoir Dogs, Falling Down features a nameless hero - Michael Douglas. Divorced with a child he cannot see, one morning at this traffic jam Douglas stops doing what everyone expects him to do and leaves his car in the middle of the road. From then on he stumbles upon all sorts of people, creating interesting interactions demonstrating many things that are bad with contemporary society and many things that are bad with us as we interact with society (xenophobia and violence on TV, to name two). As Douglas goes about questioning society his adventure turns into a rampage that spirals down and grows more and more violent. Which is when we get to see his mirror image - Robert Duvall - a person very similar to Douglas but on police side of things - try and track Douglas down. Duvall has to contend with similar problems Douglas does, but he sort of shows us the right way to do it. Eventually, both of them meet for a duel.
There is not much more to Falling Down than the collection of criticisms concerning society. That is more than enough to sustain the film, though, and its all aided by the solid performance of the two leads. For a relatively lackluster director like Joel Schumacher falling down is quite the achievement!
Best scene: There are many contenders here, but I think the best one is the scene early in the film when Douglas loses his grip and leaves the car behind him. It's very well directed in the tradition of Hitchcock. I wonder what came first, Falling Down or the video for REM's Everybody Hurts.
Picture quality: In one word, obscene. They didn't even stabilize the telecine machine - the picture is shaking!
Sound quality: The stereo only soundtrack here shows signs of promise, but being stereo only in the age of 5.1 it sounds very inferior.
Overall: An inspiring film that is let down by a very badly made DVD transfer. 4.5 out of 5 stars.
Posted by Moshe Reuveni at 11/18/2007 10:59:00 pm
Email ThisBlogThis!Share to TwitterShare to FacebookShare to Pinterest
Labels: Film