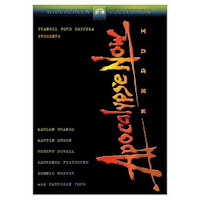 Lowdown: An extended journey to the darkness within us.
December 2001 Review:
Several scenes that place the film in its initial context – as a film about Americans fighting a war in Vietnam – were added to one of my all time favorite films. They help the film (and the viewers) stay in focus, in what was initially an extremely hard to digest film (which is probably why I like it so much).
Which version is better? It’s hard to say; it’s not like Blade Runner, where the “easier” version sucks in comparison with the director’s cut. It is like Blade Runner, though, in that it would be easier on the viewer to watch the Redux first. I guess both versions deserve their existence.
Additional interesting notes:
1. The DVD’s picture quality, with its lack of noise and its anamorphic capabilities, is way better than the LaserDisc version I was used to.
2. I got the DVD from the Internet before it became available here for rental.
3. Three of my all time favorite five films are also landmarks in sound design.
4. If I were to build a listening room, this would certainly be a good choice to initiate it with.
Contemporary review:
Apocalypse Now is and has been one of my all time favorite films. Not that this is a film I watch in order to feel like I'm having a good time, but because this is a thinking film. It is also one of Coppola's greatest films, together with his Godfather duo.
This introduction is there to say that because I am so used to Apocalypse Now I cannot truly review it; what follows is a pale imitation.
At the risk of repeating what every other person will tell you about Apocalypse, I will say that while this film seems to be about the war in Vietnam it is actually a journey into the good/bad conflict that takes place in our heads all the time and how society handles that conflict. Just look at Abu Ghraib and what normal people did in there to see that there is a dark side to us all; the people in charge there were not different to the people taking the upriver ride in the journey film that is Apocalypse Now.
Best scene: There's an ample supply of best scenes with this one, and the Redux version adds a few more. However, the best of the best is obviously the famous helicopter attack scene for its high impact.
Picture quality: The DVD I have of Apocalypse is an American NTSC version, so colors are all over the place. Signs of aging are obvious, too, but overall the picture is good and its look adds to the film's impact.
Sound quality: Fifteen years ago Apocalypse was the film to demonstrate your home theater with. While it lacked the brute force behind Terminator 2, it did offer superb imaging in a soundtrack that was designed with home theater in mind rather than the flawed cinema that has to cater for people sitting all over the place. However, by today's terms the lack of low frequency action is notable and what was once unique is now average (or what you would hope to be average). That said, the imaging is still excellent.
Overall: You have to be in the mood to watch this one, and the last hour or so of this very long film could take you to sleep all too easily. In the right mood, though, this is a 5 out of 5 stars film; if in the wrong mood, I suggest you hang on for the proper mood to come...
Posted by Moshe Reuveni at 11/10/2007 06:26:00 pm
Email ThisBlogThis!Share to TwitterShare to FacebookShare to Pinterest
Labels: Film