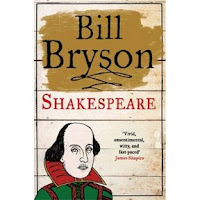 Lowdown: Much ado about Shakespeare’s world but not much ado about Shakespeare.
Review:
For the record, I don’t care much for Shakespeare. Sure, I understand the importance of his work and its cultural value, but please do not expect me to enjoy plays I can’t understand even when subtitles are employed. What I am trying to say here is simply this: I did not read Shakespeare, a biography of the famous playwright, because of what I think about William; I read it because it was a book written by Bill Bryson, one of my favorite authors, and when a new Bryson is out I get it.
Even before starting reading Shakespeare I couldn’t help noticing the relative thinness of the book. At around 200 well spaced pages, we are not talking thickest book ever league here by all accounts and especially by the Bryson account. Indeed, as you read the book, you quickly realize why this is the case: we hardly have any data about Shakespeare the person. We know basic stuff about his real estate deals and shows he had before the monarchy and his tax avoidance schemes, but that’s it; not many facts to fill up a book with.
The way Bryson addresses this problem in order to still manage writing a book about a person on which we know next to nothing is interesting. Instead of telling us much about Shakespeare, Bryson tells us a lot about his environment. The result is that by reading Bryson’s Shakespeare I managed to learn a lot about the lifestyle during Shakespeare’s time: I didn’t realize, for example, just how bad things were at the time with the plague; I thought that was over and done with by Shakespeare’s time. I didn’t realize that the meat eaten by most of the people at the time was meat we wouldn’t even dream of eating – stuff like, say, storks; in fact, it’s quite interesting to ponder just why our choices of meats have become the way they are. I got to learn a lot about how London, one of my favorite cities (don’t know about living there, though) was like at the time and what leftovers from Shakespeare’s time I got to see in my travels there. And I also got to learn a lot about the main power source behind most of the more eventful events back at Shakespeare’s time, religion, and namely the fight between Protestants and Catholics and its ensuing side effects – like the minor affair with the Spanish Armada. With more than half of the book devoted to the background Shakespeare has operated from, you can argue that you know a lot about him even if you don’t know much about him; and given that the story is told by Bill Bryson, a writer who knows how to convey facts in an interesting and readable way that makes you laugh from time to time, the background part of the book is surprisingly interesting.
Things, however, are not always that good for Shakespeare the book. There is a dark side to Bill Bryson: As has been revealed in his books about the English language, The Mother Tongue and Made in America, Bryson has the potential to become quite boring with his tedious analysis of the mundanely boring. In the past it used to be words, and in Shakespeare it is to do with trying to learn about Shakespeare through his plays; quickly enough, we go down to the level of words analysis, and for 50 pages or so I was wishing I was reading another book. Granted, Bryson means well; it’s just that his love for English can too easily get the better of him.
One mystery Bryson’s Shakespeare seems to have solved for me is the mystery of Shakespeare’s identity. By reviewing the various conspiracy theories concerning who was truly behind the plays on a historical timeline and through the analysis of the claims, Bryson shows us pretty quickly – and very entertainingly – how facts are the most missing element of those theories. As in the case of religion, the various conspiracy theorists never let the truth get in the way of their wishful thinking, even if that wishful thinking was pretty limited in its scope; and as is the case with religion, we cannot really verify from where we are now whether Shakespeare was indeed the person behind the plays we know, but what we can tell is that the various conspiracy theories are very unlikely to be even remotely true.
Overall: For a review of what is by now a forgotten era, Shakespeare is not a bad read at all. The final score depends on your view about the balance between interesting background reviews vs. the tedious language analysis; I would go with 3 out of 5 stars.
Posted by Moshe Reuveni at 11/08/2007 10:12:00 pm
Email ThisBlogThis!Share to TwitterShare to FacebookShare to Pinterest
Labels: Book