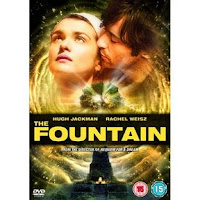 Lowdown: Love, death, mysticism, and all that crap.
Review:
It’s not often nowadays to stumble upon a film that feels like a total waste of time, a film where you prefer to just stop watching it in the middle but continue just in case some miraculous recovery takes place at the end. Rare, yes, but it does happen,; The Fountain is one of those lucky ones. It’s bad enough for any film, but for a film that’s classified as science fiction it’s even worse (pointing at the false logic that often sends everything that’s even slightly weird to the science fiction bin regardless of how much science there really is in there).
The Fountain’s story takes place over three different timelines. In the first and most conventional, we have Hugh Jackman portraying a scientist obsessed with finding a cure for his partner Rachel Weisz’ cancer. He does it by doing all sorts of weird experiments on non-human apes, and the plot progresses with him trying out this new bit of tree that someone has acquired from South America which causes miraculous recovery in one of his test subjects. While dying, Weisz is busy writing a book called The Fountain, which tells the story of the love of the same two characters in the second timeline: There, Weisz is the queen of Spain, pursued by the Spanish Inquisition, and Jackman is a loyal warrior of sorts sent to South America to find the secret of life. In the third and most obscure timeline, Jackman is floating in space (as in “space, the final frontier”) on board the tree of life and messes with it as he goes along.
All three stories are mixed and intertwined. In an annoying Pulp Fiction manner timelines are mixed and scenes are repeated, as if in a vain attempt to hide the severe lack of substance the film so terribly suffers from.
It is obvious that the film is about love and death, trying to say things like “love is beyond death” while trying to show how people cope with death and what death means to people. However, it makes its point, or rather tries to make its point, through the extensive use of mambo jumbo religious quotes and meaningless stuff that is very well padded with mysticism but amounts to nothing once you peel those layers off. I’ll be blunt: the film is so full of bullshit it’s bursting at the seams. Want to know about the meaning of life, love and death? By all means, read The Selfish Gene; don’t waste your time on this Fountain crap because it doesn’t say anything, at least nothing with any sort of a meaning.
The film is not just bad because of its active deployment of mysticism in its attempt to hide its lack of substance, it simply doesn’t work at the basic plot level in the first place. For Jackman to think that he can really find a cure for cancer just like that is incredibly stupid, yet the film has him managing a group of people who respect him and running an experimentation process that must cost a bundle. The queen of Spain could be saved using conventional manners before the quest for the secret of life is commenced, in order to secure the future of the quest; but no, our heroes jump over to South America leaving the queen to rot (at those times, just going there and back again would have taken ages). And what the hell is that tree doing floating in space?
Worst scene: I guess that would have to be the end, because it’s so bad I can’t even remember it three days after watching the film. What I do remember is that it further emphasized the “no point” element of the film.
Picture quality: I dare not pass judgement here, as the film is too dark to work well on an LCD based TV.
Sound quality: Ordinary plus. During some moments the director lets the sound take the lead, which is very interesting (but yet another attempt to hide that huge vacuum behind the film).
Overall: Avoid bumping into this floating tree at all costs. 0.5 out of 5 stars.
Posted by Moshe Reuveni at 10/17/2007 10:29:00 pm
Email ThisBlogThis!Share to TwitterShare to FacebookShare to Pinterest
Labels: Film