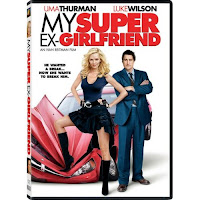 Lowdown: Superman out, superwomen in.
Review:
Ivan Reitman is one of those directors that has been around for a while and has shot many a comedy in our general direction, yet none of his shots ever hit the bullseye. No, not even Ghostbusters. Some times, however, he can make you smile or even laugh a bit; My Super Ex-Girlfriend is a case in point.
It’s not just the laughs that turn Super Ex into a nice film to watch. It’s also the originality: with most films today, especially those coming out of Hollywood, everything is so predictable and everything always follows the same tried and tested formulas, and worse – everything adheres to this politically correct way of doing things. In short, films are too much like one another. Super Ex is slightly, but significantly, different here: it does not hesitate to step a bit off your run of the mill social conventions. Sadly it doesn’t go far, but from an easy going American made comedy one cannot expect more. Sadly.
Without further ado, let’s get to the plot. Luke Wilson, an actor whose face I’m familiar with but about whom I was never bothered to know much, is your average guy. In typical comedy fashion he is your good hearted lovely guy that never seems to have much of a success with the opposite sex – you know, the type of character that is meant to strike a chord of identification with all suppressed male viewers. Anyway, Wilson’s luck changes when he stumbles upon this girl who would finally go out with him. Little does Wilson know, however, that behind the simpleton looks this rather mundane Uma Thurman is actually the superhero commonly referred to as G-Girl, who – in a touch of male chauvinism – is famous for single-handedly stopping jewelery shop burglaries.
I’m actually misleading you here, because Thurman is so anxious to go out with someone that she tells Wilson who she really is within two seconds. Once she does, they go on to have these fantasy like experiences that one can have when one’s girlfriend is a superhero (refer to the ‘best scene’ paragraph below). And then, as is expected in a romantic comedy, the love triangle element creeps through, and Wilson decides that as super as Thurman is, she is not the right girl for him; which is actually one of the smarter points the film has to make, because too many people don’t realize that glamor does not necessarily mean quality.
So Wilson breaks up with Thurman, which is when the Ex part of Super Ex kicks in. Thurman is not that happy with being chucked out, and when a superhero is angry a superhero can be really angry: she goes on a rampage, doing all sorts of nasty fantasy things to Wilson: the opposite of what they’ve done when they were together. Do not worry for Wilson, though: there is a happy ending at the end of the rainbow.
For a romantic comedy, Super Ex is rather witty and full of nice touches. Idea wise, even though the film is easy going, there is quite a lot behind it: While you can dismiss it as chauvinistic, pointing at scenes in which the superhero leaves her bag with her boyfriend before going off to save the day, it is clear that what the film is about is the confrontation guys “trained” in a patriarchal society face when having to accept a world in which woman wield power, too.
I suspect we will see many more films of the like of Super-Ex once Billary Clinton takes power.
Best scene: Thurman takes Wilson for a flight above Manhattan, only that this time she’s not wearing underwear. And they end up doing what it is that Superman rather stupidly (if you ask me) never even thinks about. Mid air.
This is exactly what I’m talking about when I say that Super Ex treads off the beaten path (but not by that much).
Picture and sound quality: Average at best.
Overall: This is a light comedy of the 3 stars caliber. However, it deserves to be rewarded for its innovativeness – 3.5 out of 5. Recommended.
Posted by Moshe Reuveni at 9/20/2007 11:42:00 pm
Email ThisBlogThis!Share to TwitterShare to FacebookShare to Pinterest
Labels: Film