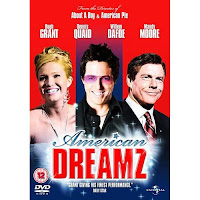 Lowdown: A sarcastic look at the way we live.
Review:
I didn't expect much of American Dreamz. I didn't have any expectations at all; but as happens from time to time, I was very pleasantly surprised. I liked American Dreamz!
American Dreamz is the name of a reality show not unlike Australian Idol. It's hosted by Hugh Grant, who's a nasty piece of work that got to be successful by thinking only of himself. But Grant is just one of the characters the film follows: We also have Dennis Quaid in the role of George Dubya, a recently reelected president who put the USA in an Iraqi swamp and suddenly gets the urge to read the papers, which causes him to realize things his advisers never told him before. His revelations cause a deterioration in his ratings, so in order to increase his popularity he becomes a judge in American Dreamz. Then we have a contestant in and her would be boyfriend who is so stupidly obsessed with her he doesn't realize she only uses him and his background of an injured war veteran in order to win crowd votes. And last, but not least, we have a Muslim terrorist who moves to the USA as a sleeper agent only to get called to take part in the American Dreamz show in order to have the opportunity to kill the American president.
All these characters converge together through the reality show, which serves to expose the thick unreal layer of their lives. I won't say much more in order to avoid ruining the film for you, but as the film develops each of the characters is very sarcastically exposed and the very shallow substance behind which it lives becomes obvious for us all to laugh at. We laugh at the dumb boyfriend who's obsessed, the evil girlfriend who's thinks a game show win will make her a better person, and the president who is dumber than all of us viewers yet still wields so much power in his hands. We laugh at them, and we actually find that we're laughing at ourselves: the film mocks fictitious characters, but all it laughs at is our way of life - and we're not that different to the characters in the film. The only one who is different and who doesn't get mocked is the terrorist, who becomes the cleanest character of the lot.
Of course, you can think the film's focus on the USA means that it applies to the USA alone since it is "common knowledge" Americans are dumb and selfish; but that would be pretty foolish. I think it is very easy to see the film mocks the materialistic, hedonistic Western way of life in general. Is John Howard any better than Bush in the way he steers our emotions and the way we keep on reelecting him despite the damage he's doing to our society?
The film does its sarcastic work well, but it is not perfect: It doesn't go much more than showing us the problems; don't expect a solution. And when it does show us a problem, it doesn't explore it to get to the bottom of things; it settles for the cheap laugh. It's good, but it could have been done better. Sadly, it settles for the cheap laugh rather than the true statement.
Other than that, certain characters are taken too far to the extreme for their own good. Quaid does a very dumb Bush, but it's obvious he overdoes the dumbness. The same goes for most of the other characters.
Best scene: Dennis Quaid learns through the newspapers (they show us "The Guardian") that Iraqis are not all the same and are actually made of several ethnicities, and that North Korea is not exactly like an evil superhero's nemesis.
Worst scene: Dennis Quaid dumbs down Bush by moving his head from side to side in a retard like fashion.
Overall: A light but surprisingly funny sarcastic affair which made me laugh aloud quite often. 3.5 out of 5 stars.
Posted by Moshe Reuveni at 7/11/2007 09:07:00 pm
Email ThisBlogThis!Share to TwitterShare to FacebookShare to Pinterest
Labels: Film

I mostly agree. (which you probably already know.) I reluctantly enjoyed the film, though I didn't love it and I wish it had something more to say.

I'd also like to note that while Quaid was clearly representing a president we all know, in the film his character was named President Staton.

Anyway, I admit it: I've re-read all of your reviews before writing this one, and it probably did have an effect on the final result.