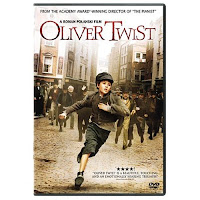 Lowdown: A remake of the same Oliver Twist.
Review:
Roman Polanski seems to have always been one of those directors that I look up to, someone who can make something out of nothing and rarely (if ever) disappoints. From Knife in the Water through Rosemary's Baby and Chinatown and even Pirates, let alone his more recent films, the guy can direct. So when his recent version of Oliver Twist hit the weeklies shelf at the video store I grabbed it with one hand (that's all it takes to hold on to a DVD).
Story wise, Polanski's Oliver Twist is not different to the Twists of old. Set in Victorian England, Oliver is an orphan brought up in a typical orphanage run by the church. When he shows signs of rebellion he is sold to a funeral/coffin business, where he encounters harsh treatment. He escapes to London by foot, where he meets up with a gang of criminal kids run by an old guy, the famous Fagin (Ben Kingsley). The point of it all is that wherever he goes he is used and abused, with no kindness whatsoever. That is, until he stumbles upon a rich guy who is willing to give Twist a chance, only to have the child taken away from him by the criminal gang.
The point Polanski is trying to make in the film is just how far a bit of kindness and appreciation to your fellow human beings can take a person, and the contrast to the way in which institutions and society treats people. The church receives special treatment here, but generally speaking you wonder whether this point is emphasized because of the way Polanski himself was sentenced to a jail term in the USA, thus forcing him to become a fugitive.
The film is definitely well directed and it's interesting to watch, but other than that there's nothing truly special about it. We watched David Lean's Oliver Twist from 1948 not that long ago, and I have to say that I couldn't really find much in Polanski's version that adds to Lean's. If anything, I think it is very obvious to say that Alec Guinness, Lean's Fagin, is a much more interesting and complete character than Kingsley's.
Best scene: Polanski plays a lot with darkness and light in the film to drive his point across, and naturally for a Charles Dickens story most of the film is dark and therefore depressing. However, when Oliver flees to London there's suddenly light (an abundance of it) and everything seems living again. Obviously, this is a film made with children in mind.
Picture quality: There is an obvious attempt to emphasize light and darkness games. The result of this high contrast picture is a severe lack of detail. In addition, colors are all over the place, with way over the top saturation in the lit up scenes. I suspect some of it is intentional, though, even if I do think it has been implemented with exaggeration.
Another comment is that often you can really see through the special effects setting up the period. Those mat paintings in the background become pretty obvious too often.
Sound quality: Pretty ordinary.
Overall: A good film but nothing special. 3 stars.
Posted by Moshe Reuveni at 6/14/2007 10:46:00 pm
Email ThisBlogThis!Share to TwitterShare to FacebookShare to Pinterest
Labels: Film