DVD: Growing Up in the Universe - Richard Dawkins 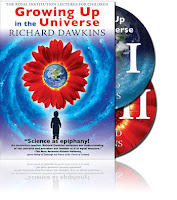 Lowdown: Five lectures by Richard Dawkins on the scientific way of grasping the universe around us.
Review:
Back when I reported buying the Growing Up in the Universe DVD's, I expressed the hope that they would be a good follow-up on Carl Sagan's Cosmos. Well, let me make it clear as we start: Growing Up in the Universe is no match for Cosmos. It is, however, a very interesting and stimulating presentation; good on its own rights, but not as astonishingly good as Cosmos.
What is Growing Up in the Universe? It's basically a collection of five lectures given by Richard Dawkins and recorded by the BBC in front of a crowd of mostly teenagers back in the early nineties. Each lecture is about an hour long, and the topics cover the "usual" Richard Dawkins themes, often following the themes of his books pretty much on a one to one basis: The Selfish Gene, The Blind Watchmaker, Climbing Mount Improbable, and Unweaving the Rainbow to name a few. Assuming you didn't read any of these books, I can summarize it for you by saying that Dawkins spreads his views on the world around us, which are essentially the scientific way of looking at things, mainly through the main subject of his expertise - evolutionary sciences. His aim is to make us aware of the universe around us and appreciate it for what it truly is.
The result is everything you can expect from Richard Dawkins: A funny, entertaining, stimulating and educational presentation that serves to open your eyes and, well, help you graduate into the universe we're living in. While, generally speaking, the lectures are aimed at teens, I felt as if some of them go way over the top: some of the subjects discussed on those lectures will buzz over the heads of most of the adults I am familiar with. Others, though, are very good and will definitely serve to open people's minds young and old - most notably the 4th lecture, which is the Selfish Gene themed lecture.
Throughout the lectures there are all sorts of experiments and demonstrations done, usually using the help of kids from the crowd, which help in giving the subject matter some sort of a grip on reality.
What else can I say about the lectures? Well, it is pretty evident that Dawkins' taste in clothes and shirts in particular is devastatingly bad. It is also obvious the guy is in love with stick insects. But jokes aside, Dawkins keeps on referring to his written notes throughout the lectures, a habit that can really interrupt the lecture's flow; this point is really interesting given that contemporary presentations I have seen him giving are pretty much flawless, which implies that he has greatly improved his presentation skills with time.
Last but not least, given that we are talking here about Richard Dawkins, it is interesting to note the lectures' view on religion. While Dawkins doesn't go out and right expressing his views on religion here, he leaves no doubt whatsoever what he thinks of the matter. I suspect that those who think people like Dawkins (and I, for that matter) are disrespectful to religion will wish to avoid having their kids view these lectures; the loss will be entirely theirs (and their kids'). I have to admit it is pretty funny to see how Dawkins builds up his arguments, because by now I can tell when he is about to attack religion with an accuracy of plus-minus two seconds. Thing is, I might joke about his predictability, but I will be very hard pressed (if not totally incapable) to find a person with whom I agree more than Dawkins. And I'm not limiting the discussion here to religion alone, because there is loads more to Dawkins than an assertive atheist.
What can I say? I can only wish for more of him. Growing Up in the Universe is well worth the admission price, especially when considering that its revenues will be used for educational purposes.
Best scene: Dawkins demonstrates what good faith is by showing his faith in the universal laws of physics, placing his face millimeters away from a rushing cannon ball he knows will never get to him.
The next best scene is a cameo by a dude called Douglas who volunteers from the crowd to read a passage from his book, The Hitchhiker's Guide to the Galaxy. I'll put it this way: The guy knew how to read aloud. He knew how to write, too.
Picture quality: It's NTSC, it's 4:3, and it's very bad. It looks like a collection of cubes.
Sound quality: I suspect it's glorious mono. Not that it matters much given that all we see are lectures, but it would have been better to feel as if you're inside the theater with the rest of the crowd.
Overall: Not Cosmos, but still excellent and potentially attractive for kids. 4 stars out of 5, it made me wonder why my teachers weren't half as good as Dawkins is in making the subject matter so interesting.
Posted by Moshe Reuveni at 6/29/2007 11:01:00 pm
Email ThisBlogThis!Share to TwitterShare to FacebookShare to Pinterest
Labels: TV

You're right. The aim is the same: impressing little kids to make them interested in science.
Basically, he stood at the very end of a cannon ball pendulum as it swiveled towards him, proving his faith in the universal laws of physics since he knew the ball would never get higher than it had when he released it. The funny thing is the slightly cross-eyed look on his face as the ball gets to like a millimeter from his face.