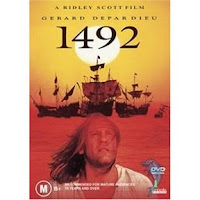 Lowdown: Scott's prelude to Gladiator.
Review:
You would expect me to have watched 1492, given that Ridley Scott has directed my favorite film and given the Vangelis soundtrack. But up until yesterday I didn't; I saw bits of it, but I never saw it from start to finish. It was time to make amends.
Released in 1992 to celebrate the 500th anniversary of Columbus' discovery, the film tries to portray the story behind Columbus the man (portrayed by one of my favorite actors, Gerard Depardieu). It tells the story of a visionary who suspected the world was round before Copernicus came up with his famous book and despite the Spanish Inquisition doing its best to subdue free thinking. Columbus suspects there is a western path to India, and sets out to convince the Spanish queen (Sigourney Weaver) to support him on his quest, and eventually he gets his way. As we all know, he makes his historical discovery and gets to some islands close to America; but that's just the first act of this film, which focuses mostly on the utopian world that Columbus tries to establish on the islands he had discovered. It seems like the nature of man is there to ensure that despite all the vision and ideals he has, he is still doomed to fail.
I don't know how authentic the events portrayed in the film are. For a start, the Spanish queen is portrayed very favorably, but at the same time she allowed Columbus to use her resources on a quest for an elusive path to India she also kicked all Jews from Spain; not the greatest humanitarian in history. Than again, authenticity should not be the thing standing between the viewer and a satisfactory film watching experience.
The main thing standing between the viewer and some satisfaction is the rather boring nature of the film. The first hour is brilliant: exciting, full of cinematic vision. However, just as Columbus has his first encounter with the new land's locals, the film starts to lose its focus. From a film about a visionary defying all odds to make a difference, 1492 turns into a film about a failed vision and the nature of human beings. It goes into disarray.
Still, the positive is there and it's very positive. You can clearly see where Gladiator came from a few years later: Both 1492 and Gladiator are films about a creator defying orders to create something of a new show for an ungrateful crowd. I suspect in both cases Scott is actually talking about himself when he makes this statement, and about us, the viewers and the establishment, as the ungrateful crowd. The bottom line, however, is that while 1492 is unfocused and boring Gladiator is sharper and more attractive (yet also far from being a true state of the art film).
Best scene: Columbus demonstrates to his son how the world must be round using a ship sailing to the horizon and an orange in a show of how facts and logic work together to create a vision that defies common perceptions.
Picture quality: Pretty dated.
Sound quality: Dated as well; some of the sound effects really stand out badly. That said, there is a significant attempt here to engulf the viewer with the sound, in a way hardly many other film come close to. Add Vangelis' majestic music and you have yourself quite a nice experience.
Overall: It's a pity 1492 isn't as good as starts out to be. 3 out of 5 stars.
Posted by Moshe Reuveni at 6/17/2007 12:13:00 am
Email ThisBlogThis!Share to TwitterShare to FacebookShare to Pinterest
Labels: Film