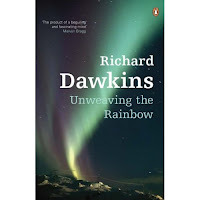 Lowdown: Good science is poetry in motion.
Review:
Whenever we go and visit our obstetrician I take my current book with me. Between the queues and the waiting, it's a good opportunity for reading. One of the midwives there has noticed this habit, and by now she regularly asks me to show her the book I brought along as "he always brings interesting books with him". Alas, her reaction to Unweaving the Rainbow was somewhat different: While at first she marveled at the cover, she then noticed the author's name and said "I don't like him, he's weird". She didn't have an answer when I asked why, and she refused the challenge when I said I'm willing to have ourselves a bit of an argument about Dawkins' nature.
Anyway, the point of this whole gossip story is to say that this unexplainable attitude of "this guy is weird" simply because "this guy says things that upset the way I like to see myself in the world" is exactly what the book is about. Unweaving the Rainbow is a book about the philosophy behind good science and the power it can have in inspiring good things. The book's premises are not unlike the midwife story: Keats had once written a poem sharing the book's title in which he accused Newton for ruining the rainbow as a source of poetic inspiration by explaining how the rainbow really works; Dawkins picks up the gauntlet and proves Keats wrong.
To summarize, the book starts by telling us how a rainbow really works, demonstrating that no one who understands how a rainbow truly works can claim that this reality is less poetic than the false illusion in Keats' head (shared by many others today, still). Dawkins goes on to show what other discoveries were made using the same knowledge that unweaved the rainbow - say, the discovery of the ability to tell what stars are made of, or the age of the universe, or that the universe is expanding etc - all things that could easily be at the centerpoint of many a poetic poem.
Dawkins uses the analogy between poetry and science to demonstrate what he considers good scientific poetry vs. bad ones - astrology and such, and even scientists who tend to glorify themselves by being obscure (like my university professors, I must add). In the process, Dawkins knocks about a few of his colleagues, but while he ensure he's providing adequate explanations as to why he shoots them down I did get the feeling he was picking on a few of them too much; at least too much as far as the book's flow, which was pretty excellent till then, goes.
Eventually Dawkins retires to his familiar territory of evolution and genes as he further digests his familiar theories on the subjects in order to show the potential of science as a source of inspiration. While it feels as if this third and final act of the book is a bit disconnected from the book's previous acts it is very interesting; the chapters discussing the brain and how it perceives the world are quite illuminating, and I have to say they were more than a bit of an eyeopener to me. Basically, Dawkins discusses how what we perceive as the reality around us is, in fact, just a model built inside our brain.
But don't take my word for it, read the book. It provides a whole of a lot more than what I can jot here! In the usual Dawkins fashion, it is a flawing read, and despite the potentially complicated issues it discusses it is also a fairly easy read. And most importantly, between the subject matter and Dawkins' style, it is also a very interesting read.
Overall: Again, Dawkins proves his skills in communicating science to the masses. Despite some deviations it does very well - 4 out of 5 stars; Unweaving the Rainbow provides additional ammo to the my notion that Dawkins currently reigns on high as my favorite author.
Posted by Moshe Reuveni at 6/10/2007 11:56:00 pm
Email ThisBlogThis!Share to TwitterShare to FacebookShare to Pinterest
Labels: Book